Can you let us now the general guidelines for tipping in the . (Question sent from )

The can be a bit confusing about when you tip or not. Here is a brief guide to where you would or would not tip. 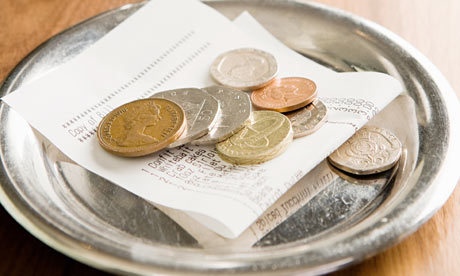 Breakfast Cafes
Generally speaking no tips are required here the is not like .
Bars
If you are ordering drinks and just bar food no tip will be expected.
Pubs
No tips will be expected even if you order food from the counter that is then brought to the table. In Some cases better Pubs cross over to restaurant levels where you will be served at your table. You should tip in this case
Restaurants
If you are served at your table, order taken and the food brought to you should tip.
Service Charges and Tipping
Always look at the menu/receipt it will tell you that a service charge (normally 12.5%) has been added. In some cases this may only be applied to groups of x number. Most people in this case will pay the bill and leave no tip.
Tip added to credit card machine.
Beware the service charge and then an additional tip box in the card machine process.
You can add your tip to the card transaction or ask for just the bill value and leave a cash tip.
Taxi
As a general rule use the round up pound in and 10% guide. Eg. £5.30…then give £6.
Hotel porters
The better the hotel the more it will be expected to tip. As a rough guide £1-1.50 per bag, this is if the bags are taken to your room

Tipping is not always expected in the UK in the way it is in the United States or Canada. All staff in the UK, must by law, be paid at least the National Minimum Wage (£7.20/hr (From April 2016, lower rate applies to those under 21 years of age) whether they receive tips or not.  An employer is not allowed to use tips to top up wages to the legal minimum. Therefore, unlike in much of North America, the need and culture for tipping is much less.

It is not a requirement to tip in taxis, but it is customary to round up to the nearest pound on metered taxi journeys, more as a convenience to both passenger and driver than as a tip.
On an airport journey in a booked minicab you might wish to tip two or three pounds if the driver helps with your luggage.  If taking a licenced London taxi cab to or from Heathrow or in London a 10% tip is the average amount, although as in the previous paragraph, it is not a requirement, nor should it be expected by the driver.
There is a big difference between a taxi (usually a black cab) and a mini-cab. Anyone who can drive can become a mini-cab driver whereas taxi drivers have received a lengthy training, tend to know their way and serve better. However, the price of a black cab is usually markedly steeper than that of other services, and some will refuse to tip on these grounds.

If your food is delivered to your hotel or apartment, tipping is not required, but the delivery driver would obviously appreciate a pound, or some/all of the change as appropriate, as a tip. Some customers tip, some do not.
If you pick up the food from the takeaway restaurant, tipping would not be inappropriate. Don't do it.

No tips are ever offered in fast food restaurants.
In a cafe, you may receive waitress service to bring your tea, coffee, sausages, or whatever you have ordered to the table. In these establishments tipping is not usual. If you feel the service has been especially pleasant you can leave a pound, or your change in appreciation.
In coffee shops, such as Starbucks, there may be a tip jar on the counter, but very few customers offer tips.
In casual cafeterias, where you collect your food and place it on a tray, commonly found in tourist attractions, tipping is never appropriate.

In casual restaurants, where you pay for your order at a counter, but food is brought to your table, tipping is uncommon. You are welcome to leave a pound or two if you wish.
In restaurants where you place your order with your waiter/waitress and receive food, and your bill, at your table, it is usual to tip around 10%. The expectation does vary from place to place - in fine dining restaurants where you receive personal service, a tip would always be expected (while never compulsory, it would be considered rude unless there was a problem with the service), whereas in the most casual of restaurants tipping is not universal.
If you have been unhappy with the service, you should not leave a tip.
In some restaurants, a service charge is added to the bill, typically 10% or 12.5%. This should be noted on the menu, sometimes only for larger groups. If it is not then the restaurant is acting unlawfully and it would be appropriate to object, to ask that it be removed. If you are otherwise unhappy with the service, you should also request that it be removed, explaining your unhappiness.
In any case where a service charge is added, or the menu notes 'service included', be aware that this may or may not be passed on to the waiting staff. In such cases you can ask your waiter/waitress, and they will usually be more than happy to answer. Beware that in some cases a service charge may appear on your bill, and if you pay by credit card the machine may then ask if you want to add a tip. You will find that cash is preferred, as certain establishments will take a portion of the tip as a 'transaction' fee (and many will deduct Income Tax from tips collected through card payments).
In some cases a restaurant may print 'service not included' on the bill or menu. This is a request for a 'tip'! You are not obligated to offer anything, but 10% would be normal in this scenario if the service warranted any sort of tip..
Keep your voice down! The British do notice if someone's voice is raised and if other people can hear your conversation, they will think you are very rude. Most won't say anything but you may be subject to hard stares and tuts.

Bartenders in pubs and bars do not expect to be tipped. If however you have developed a rapport with the barman you can buy him a drink, by saying 'and one for yourself', which is an offer that they buy a drink for themselves, although since this may not be permitted, they would take it as a tip of around £1. This is far from typical, and would be inappropriate for instance, on your first visit to the bar.

As with anywhere in the world, a porter bringing your bags to your room expects to receive a cash tip. Around £2 would be reasonable.
You should not tip room service bringing food/drinks to your room.
A few guests choose to leave a tip for their chambermaid, and this would be considerate especially if you have left a mess in your room, but it is not a requirement.
In smaller hotels and guesthouses tipping is not expected as they tend to be family run establishments. Such places appreciate repeat custom or positive feedback on recommendation sites.

Massage, hair and other services

In the UK the price you pay for a spa treatment is all-inclusive. You are not expected to secrete money somewhere about your person in order to tip your masseur!


If you get a hair cut, tipping is common but not universal/required. Tip around 10%, in cash, rounded to the nearest pound, if you are happy with the service.