Almost 40,000 runners are taking on the 36th London Marathon after Major Tim Peake provided the count down for the start of the mass race from space.
The annual event includes elite competitors along with more than 39,000 other runners.
The millionth finisher in the history of the race, which was first held in 1981, has crossed the line on The Mall. 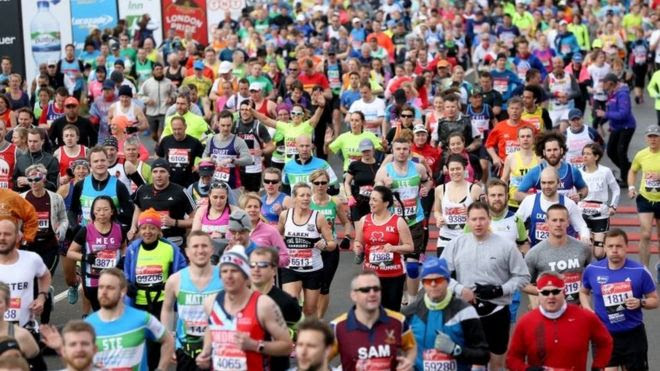 ...
Maj Peake is also running for 26.2 miles (42km) - but on a treadmill aboard the International Space Station.

He recorded a message wishing the competitors good luck, before ending with the 10-second countdown, which was shown to the runners on a big screen.
London Marathon 2016: In Pictures
The men's wheelchair race was won by defending champion Marcel Hug from Switzerland. Britain's David Weir came third.
America's Tatyana McFadden won the women's elite wheelchair race.
Jemima Sumgong - who fell at a drink station earlier in the race - pulled clear of Ethiopia's Tigist Tufa to win the women's elite race for Kenya.
Eliud Kipchoge won the men's elite race in a new course record of two hours, three minutes and four seconds - about seven seconds outside the world record.
Prince Harry, patron of the London Marathon Charitable Trust, presented the winners' prizes.

Double Olympic champion Dame Kelly Holmes, former rugby union international Shane Williams, Games of Thrones actress Natalie Dormer and Birmingham City manager Gary Rowett are among the famous participants running.
Other celebrities taking part include Radio Two's Chris Evans, The Only Way is Essex's Bobby Norris and TV personality Judge Rinder.
One runner, Christopher Barton, proposed to his girlfriend who was in the crowd of spectators at Tower Bridge.
At least four "Shakespeares" are registered to run the course to mark 400 years since the Bard's death, alongside running hot dogs, dinosaurs and Disney princesses.
Bedford grandmother Iva Barr, aged 88, is the oldest competitor in this year's race.
She has been running marathons for about 30 years and took part in the first race in 1981.
Live coverage on BBC One began at 08:30 BST and there is live commentary on BBC Radio 5 live, as well as live text on the BBC sport website.
The course takes in many of the capital's landmarks and predominantly follows the route of the River Thames.
Road closures will be in place from 07:00 until 19:00 in some places.
Posted by Visit Stonehenge at 2:15:00 pm