Jimi Hendrix's London home is to open as a permanent museum for the public to visit on 10 February 2016.
The flat at 23 Brook Street, Mayfair has undergone a £2.4m restoration with the help of money from the Heritage Lottery Fund and private donors.
Hendrix bought the third-floor flat in 1968 at a time when he was considering the next phase of his career and that summer he released his Electric Ladyland LP.
Tickets will go on sale on 2 November. 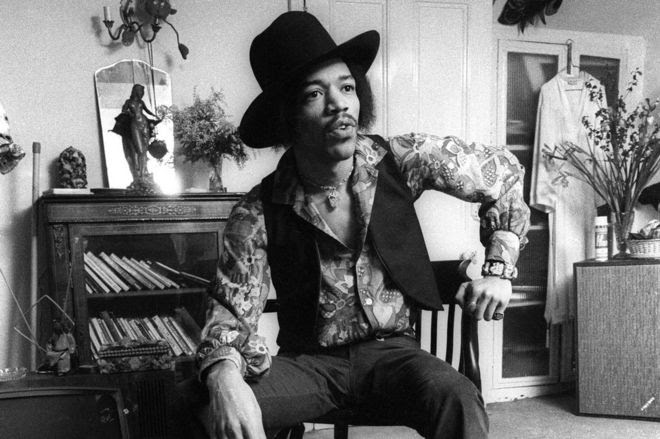 Jimi Hendrix lived at the flat with his girlfriend Kathy Etchingham
....

The flat is in the same row as the home of the German-born composer George Frideric Handel, who lived at number 25 Brook Street for 26 years and wrote many of his greatest works, including the Messiah.
Both homes are owned by the Handel House Trust, who have been using the Hendrix flat as an office, only opening it occasionally to the public.
Chairman of the trust, Alistair Stranack said: "It is hard to think of another home in the world with such a concentration of musical genius.
"We hope that the opening of Jimi Hendrix's flat will give people an added insight into the life and work of a figure whose actions have been examined no end since his death in 1970.
"While it has been a pleasure to have been working in Jimi's bedroom for the past few years, it is even more pleasing to be able to throw it open to everybody else."
Mr Stranack said that, through painstaking research into the building and Hendrix's circle of friends and acquaintances, the trust had managed to present an image of what life was like in his time at Brook Street.
At the heart of the Hendrix flat will be the main living room, restored to how it would have been when Hendrix was in residence.
Among the exhibits are previously unseen or rarely-seen images of Hendrix taken at the flat and in the local area.
The museum will also include a new state-of-the-art studio to be used for teaching and as a concert venue.
Living at 23 Brook Street fuelled Hendrix's creativity and led to many hours of writing and visits from fellow musicians led to countless jam sessions.
He became fascinated by the fact that Handel had lived just a stone's throw away and went on to buy many records of the composer's works, the most notable of which is a copy of the Messiah performed by the English Chamber Orchestra.
This is now housed at the Experience Music Project in Seattle, Washington along with a large section of Hendrix's record collection.
Hendrix shared the Brook Street flat with his girlfriend Kathy Etchingham and Hendrix referred to it as "the first real home of my own".
The couple lived there, in-between trips abroad, for around a year.
Tickets for the Hendrix flat can be bought at Handel and Hendrix House from 2 November.
Posted by Visit Stonehenge at 7:58:00 am