Don’t miss the riotously funny and critically-acclaimed Mr Foote’s Other Leg now playing a limited season at the Haymarket Theatre until 23 January 2016 following a sold-out run at Hampstead Theatre. An outrageous tale of comedy, tragedy and fame, this rumbustious production is wonderfully fun and entertaining.
In Georgian London no one is more famous than Samuel Foote. Satirist, impressionist and dangerous comedian, he has become a celebrity in a city and at a moment in time when the concept of selling personality was born. He even has the ear of the king. Adored by many, despised by some, Foote finds himself at the sharp end of attacks from the press… and a surgeon’s knife. And in an age obsessed with fame, his colleagues from the worlds of science and the stage--from Benjamin Franklin to David Garrick--begin to wonder: does fame make you mad? Directed by Richard Eyre, following his hugely acclaimed productions of Ghosts, The Pajama Game and Guys and Dolls, and starring the BAFTA and Olivier Award-winning Simon Russell Beale, Ian Kelly’s hilarious new play (based on his award-winning biography of Foote) explores our obsession with celebrities, and their rise and fall, through the true story of the Oscar Wilde of the 18th century.
View Details - Buy Tickets 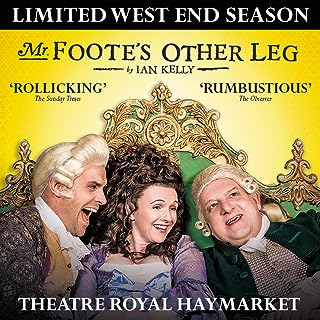