Two "magnificent" Victorian cemeteries in London are to receive multimillion-pound facelifts.
Brompton Cemetery, where suffragette Emmeline Pankhurst is buried, is to be given £6.2m to restore its landscape and monuments.
Along with West Norwood - which will receive £4.8m - it is one of London's "Magnificent Seven" cemeteries 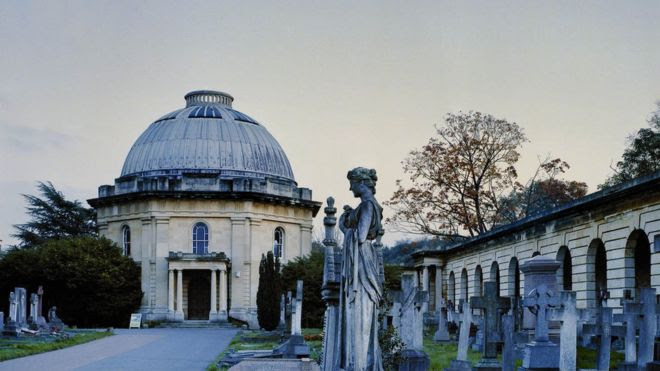 Brompton Cemetery's chapel, which was built in the style of St Peter's Basilica in Rome, will be renovated as part of the scheme

The historic burial grounds were created in London's suburbs from 1832 to reduce overcrowding.
Highgate and Kensal Green are also among the "Magnificent Seven".
Brompton Cemetery's chapel, which was built in the style of St Peter's Basilica in Rome, will be one of the monuments renovated with the funds.
The north lodge will be turned into a cafe and visitor centre.
Sara Lom, of The Royal Parks Foundation, described the graveyard as "a beautiful monument to our nation's history".
"It's a final place of rest for notable figures and unsung heroes in equal measure," she said.
The funding, made up of £4.5m from the Heritage Lottery Fund and a further £1.7m from The Royal Parks and The Royal Parks Foundation, will also be put towards conserving wildlife habitats.
Brompton has 39 acres of green space and is home to 221 species of moth, 42 species of beetle and 18 species of butterfly.
The cemetery neighbours Stamford Bridge, the home of Chelsea Football Club, and Gus Mears, who formed the club in 1905, is buried there.

Chairman of the Friends of Brompton Cemetery Arthur Tait said it would become "a hub for volunteering, training, and a place of relaxation for children and families while still being a haven for those who want peace, quiet and beauty".
Royal Parks Board member Wesley Kerr said the "marvellous communal green space" was as much for the living as for the dead.
"It is architecturally astonishing, full of magnificent sculptures, monuments and buildings set in a very beautiful designed landscape," he said.
Brompton and West Norwood, which both still hold burial services, are among 12 parks and cemeteries to have received funding across the UK.
Friends of West Norwood Cemetery said the £4.8m investment would be spent on improving the cemetery's drainage, footpaths and entrance gates.
It said the money would also be used for works on an area reserved for the Greek Orthodox community - known as the "necropolis" or "cemetery within a cemetery".