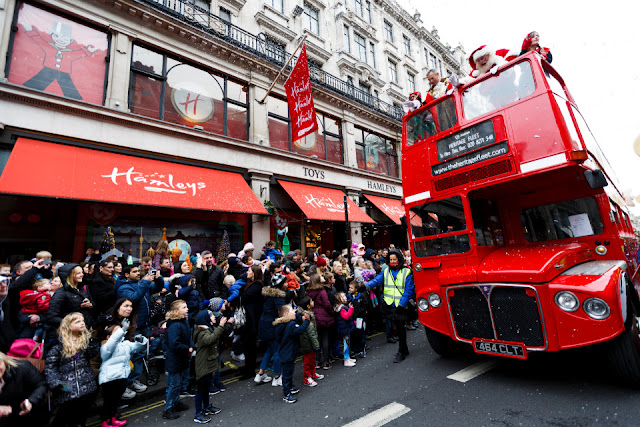 Britain's best loved toy store Hamleys brings the magic of Christmas to Regent Street once again with the world’s largest Toy Parade on Sunday 20th November 2016.Set to be a magical fun-filled extravaganza for the whole family, from 10.30am to 4:30pm, enjoy the spectacle of your favourite toy characters - old and new - in a parade of decorative floats, giant balloons, marching bands, toy cars and theatrical dancers.This years’ incredible line-up is set to be bigger than ever with a debut of Lego Ninjago’s very own Kai, the iconic giant marshmallow man Stay Puft, plus much loved favourites from CBeebies, including Peppa Pig, The Teletubbies, Go Jetters, Q Pootle 5 and Twirlywoos, Barbie, Power Rangers and The Transformers.Look out for the beloved bumbling Basil Brush who this year takes to the stage as guest host plus a special appearance from Father Christmas, who has travelled all the way from the North Pole to celebrate with Hamleys Elves and Hamley and Hattie Bear.

The parade will kick off at 10:30am on Sunday 20th of November.
It is expected to last for around six hours, giving guests plenty of time to spot all of the fun characters.
The event is being held near the Hamleys store in London, Regent Street.
Visitors arriving early will be able to spot the parade setting off from the entrance to Air Street before it makes its way up Regent Street.
The parade will end its tour when it arrives at Great Marlborough Street.
Posted by Friends of the Regent Palace at 6:13:00 pm