The Railway Children - Live On Stage at the King's Cross Theatre 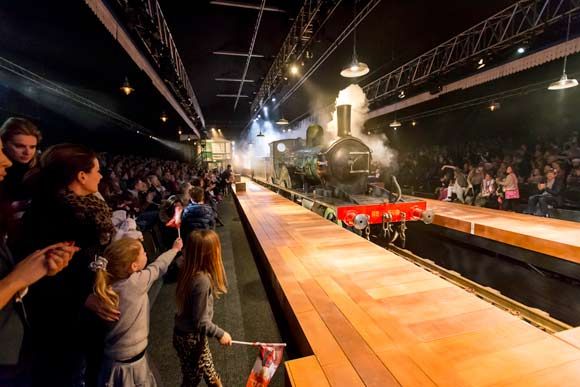 It’s your last chance to see this stunning adaptation of E. Nesbit’s classic novel The Railway Children at LONDON’S KING’S CROSS THEATRE!
Set in a purpose built 1,000 seat venue with a vintage foyer, this breath-taking show features a stage built around a real train track and a glistening 60-tonne locomotive that will steam into the theatre throughout the Christmas holiday period!
Steeped in nostalgia and charm, treat your family to the adventure of a lifetime, and join Bobbie, Peter and Phyllis as they tell the story of how they became The Railway Children!
Don’t miss your chance to see ‘One of London Theatre’s all time classics’ (Metro) before the final farewell on 8th January 2017.
BOOK NOW FOR CHRISTMAS!
Directed by Damian Cruden, the Artistic Director of York Theatre Royal, with design by Joanna Scotcher, lighting by Richard G. Jones, music by Christopher Madin and sound by Craig Vear, Mike Kenny’s adaptation of The Railway Children was first produced by York Theatre Royal at the National Railway Museum, York, where it enjoyed two sell-out and critically acclaimed seasons in 2008 and 2009.  The production then opened at Waterloo Station in the former Eurostar terminal in July 2010, where it again played two critically acclaimed sell-out seasons and won the 2011 Olivier Award for Best Entertainment, before opening in Toronto in 2011 in a temporary theatre built at the base of CN Tower in Roundhouse Park.
The Railway Children tells the story of Bobbie, Peter and Phyllis, three children whose lives change dramatically when their father is mysteriously taken away.  They move from London to a cottage in rural Yorkshire with their mother, where they befriend the local railway porter, Perks, and embark on a magical journey of discovery, friendship and adventure.  But the mystery remains – where is Father, and is he ever coming back?
2016 marks the 110th anniversary of the publication of Edith Nesbit’s much loved classic children’s book The Railway Children, which has subsequently been adapted for the stage and screen, most famously in the 1970 film version directed by Lionel Jeffries and starring Jenny Agutter, Bernard Cribbins, Dinah Sheridan and Sally Thomsett.
The production is presented in London by Tristan Baker & Charlie Parsons for Runaway Entertainment, Oliver Royds for BOS Productions and Sue Scott Davison, in association with York Theatre Royal and the National Railway Museum.