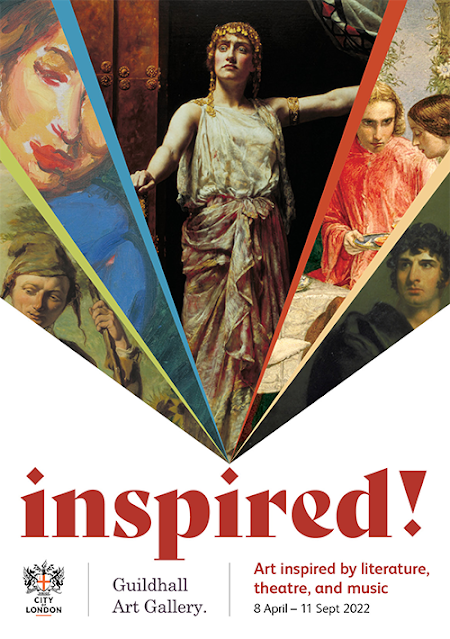 Guildhall Art Gallery is mounting a fascinating new exhibition examining the ways in which visual artists have taken inspiration from the literary arts. Inspired: Art inspired by theatre, literature and music will explore the relationship between poetry, plays, novels and music with the visual arts.

Guildhall Art Gallery, which is owned and managed by the City of London Corporation, is situated on an historic and culturally significant location, Guildhall Yard – the site of London’s Roman Amphitheatre – and houses a nationally important art collection. Established in 1886, visitors can view works of art dating from 1670 to the present day, including 17th century portraits, Pre-Raphaelite masterpieces and an extensive range of paintings documenting London’s history.

Novels were increasingly popular during the 19th century and, in reaction to Industrialisation, many Victorians valued nostalgic and Romantic novels and poetry, looking to Shakespeare’s history plays, Tennyson’s poems, medieval folktales and Greek myths. This was reflected in much of the art of the time, and Guildhall Art Gallery dives into its renowned 19th century collections to explore the dialogue between art and literature. Inspired goes even deeper to look at how theatre and music were additional sources of inspiration for Victorian artists.

Visitors will see the influence of theatre in pieces like John Philip Kemble as Coriolanus by Thomas Lawrence (1769-1830). Painter, draughtsman and President of the Royal Academy, Lawrence was taught by his father to recite passages from Pope, Collins, Milton and Shakespeare to his customers. Lawrence’s portrait of British actor John Philip Kemble (1757- 1823), depicting him blanketed in shadows, revels in the theatricality that Shakespearean tragedy affords. Meanwhile, pivotal moments in theatre history, such as the burning of Drury Lane, are captured on the canvas in Old Drury Lane on fire, London 24 February 1809 by Abraham Pether.

Lovers of Pre-Raphaelite art will be able to see pieces by celebrated names, including William Holman Hunt (1827-1910), John Everett Millais (1829-1896) and George Frederic Watts (1817- 1904). The Pre-Raphaelite Brotherhood cherished the Romantic poets and the writings of John Ruskin and Thomas Carlyle, according to whom the world itself should be read as a system of visual signs. The artists kept a list of ‘heroes’ that epitomised greatness, including Keats, and carried their inspiration in paintings with great attention to detail, vivid colour and elaborate symbolism.

Holman Hunt’s Study for the Eve of Saint Agnes (1847-48) draws on Keats’ Romantic narrative poem to tell the story of Madeline and Porphyro – forbidden lovers from feuding families. Watts’ Ariadne on Naxos, 1875, depicts the Greek myth Ariadne, the Cretan princess who helped Theseus kill the Minotaur. In some versions of the story, Ariadne is abandoned on the island of Nexos and dies, but Watts depicts her rescued by and marrying the god of wine.

Also on display will be sculptures which see the performing arts celebrated in stone. Sculptor Jaroslaw Gierrcarz Alfer commemorates Chopin’s last concert in London in 1848, which took place in the Guildhall itself. Chopin’s talent, high-profile love life and early death left him a leading symbol of the Romantic era, while mythological figures like Clytie became a symbol of unrequited love to Watts. “I paint ideas, not things” Watts said, and his sculpture Clytie represents her story as told in Ovid’s Metamorphoses with the intriguing symbolism he is famed for.

A broad collection of watercolour paintings will also be on show, with highlights including Ophelia’s Madness by Fred Walker and Cedric’s Toast, 1859 by John Gilbert. Gilbert’s watercolour painting depicts a scene from Ivanhoe by Sir Walter Scott, a Scottish historical novelist who was a seminal figure in European literary Romanticism.

English essayist, poet, and dramatist Joseph Addison, (1672 –1719) is also featured, appearing in a painting William Powell Frith (1818-1909) who depicted him alongside the fictitious country squire character he created in 1711, Sir Roger de Coverley. These celebrated names in English art are displayed alongside works by French painter Emily Levy (1826-1890) such as Paul et Virginie, 1866 and Scottish artist William Dyce (1806-1864).

Chair of the City of London Corporation’s Culture, Heritage and Libraries Committee Wendy Hyde says, This fascinating new exhibition – which uniquely fuses art, theatre, literature and music – will become a big talking point here in the heart of the City. London is coming together, and the arts are key to its recovery from Covid. Must-see exhibitions like this help create the positive feeling that re-energises the Square Mile and beyond. Inspired will leave gallery goers feeling inspired themselves. The City Corporation, which owns and manages Guildhall Art Gallery, is the fourth largest funder of heritage and cultural activities in the UK and invests over £130m every year. In partnership with the Barbican, Guildhall School of Music & Drama, London Symphony Orchestra and Museum of London, the City Corporation is leading the development of Culture Mile between Farringdon and Moorgate, a multi-million-pound initiative to create a new cultural and creative destination for London. 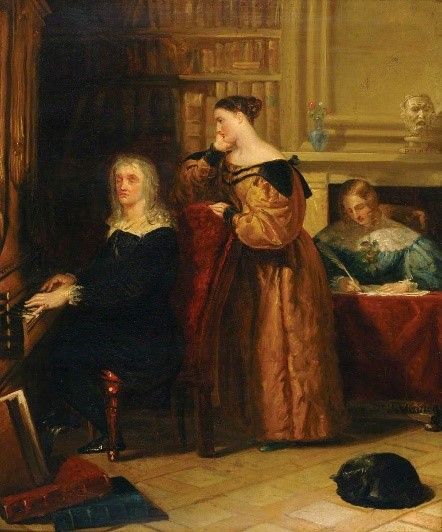