·         Inspired by the historic cargo records the installation will be officially unveiled on 22 February
·         The floor-based work will be over 300m long and span the length of the new London Dock development in Wapping
·         An accompanying free pop-up exhibition will run from 24 February to 30 April, providing insights into the fascinating history of the location and the creation and installation of the artwork
·         London Dock, located close to St Katharine Docks and the Tower of London, will comprise 1,800 new homes
Trading Words at London Dock is a major public art installation by renowned artist Gordon Young, unveiled at an exciting new development in Wapping, close to St Katharine Docks, Tower Bridge and the City.  Designed by architects Patel Taylor, London Dock will comprise 1,800 new homes and 200,000 sq ft of commercial floor space, set within 6 acres of open space, including a spectacular new public square centred upon a magnificent choreographed water feature.

The first part of the Trading Words installation will be officially unveiled on 22 February and accompanied by a pop–up exhibition which will run until 30 April, providing insights into the fascinating history and heritage of the site, as well as documenting the creation of the work – from design to installation. Commissioned by leading London property developer
St George, Young, in conjunction with graphic designer Andy Altman of Why Not Associates, has designed a unique installation that invites the community to engage with the heritage of this historic gateway to London.

Derived from historic rates and tariff-books which list the goods imported and exported via London over the last 400 years, Trading Words is a floor-based typographic installation made of granite, integrated into the public realm through the buildings of London Dock. Young's concept is inspired by Piet Mondrian’s graphic clarity and Umberto Eco’s The Infinity of Lists. The lists of words include such commodities as the more obvious ‘ale’ or ‘pickles’, as well as more peculiar goods such as ‘dragon’s blood’ which was a treatment for stomach bugs as well as a varnish for instruments; or ‘bear’s grease’ which was popular in the nineteenth century and widely believed to prevent hair loss, originally made from the fat of the brown bear.

Trading Words is the first work in London for Young who is renowned for his large-scale installations, including The Comedy Carpet in Blackpool. The artist specialises in creating public art works which become part of daily life and reflect his passion for literature and poetry.

Artist Gordon Young comments: ‘The lists and inventories of items, which had crossed the site over the past centuries, are so lengthy that they seem to stretch into infinity and beyond! They came into existence because every word had a value attached. Andy and I distilled the words into a confection which made us curious and think of them as a poetic representation of this immense tide of things from all over the globe which happened to accumulate in this spot in East London.’

Andrew Taylor, Director at Patel Taylor, adds: ‘When contemplating the vision for London Dock, we imagined a unique installation, inspired by the site’s history, that would invite residents and the public to meet and engage with the rich history of this amazing location. I’ve worked with Gordon Young many times before and thought he would bring a new distinctive reading of place.’

At the heart of London Dock is the Grade II listed Pennington Street Warehouse which once stored rum, tobacco and other high-value goods imported into the docks.  It will be the commercial heart of the development, brought back to life with an eclectic mix of shops, restaurants and offices. The warehouse is currently home to the Rum Factory artists’ studios, which opened in June 2015 and houses over 100 artists, designers and makers. Architecture practice JTP will be relocating their office and studios to the warehouse in 2018. 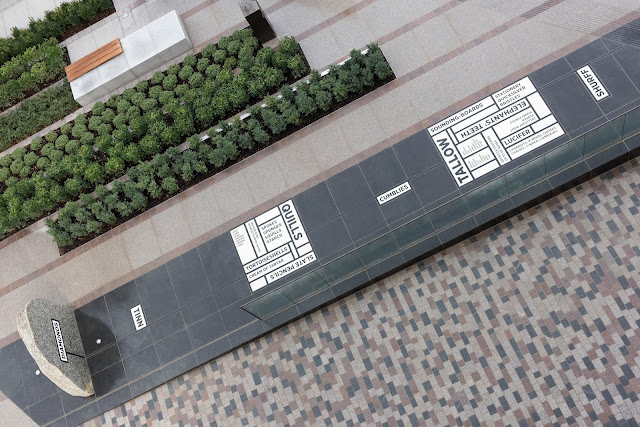