Wellington Arch, also known as Constitution Arch or (originally) the Green Park Arch, is a triumphal arch located to the south of Hyde Park in central London and at the western corner of Green Park (although it is now isolated on a traffic island). Built nearby between 1826 and 1830 to a design by Decimus Burton, it was moved to its present position in 1882–83. It once supported an equestrian statue of the 1st Duke of Wellington; the original intention of having it topped with sculpture of a "quadriga" or ancient four-horse chariot was not realised until 1912 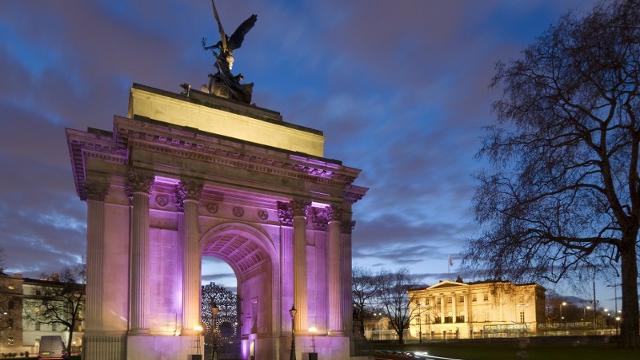 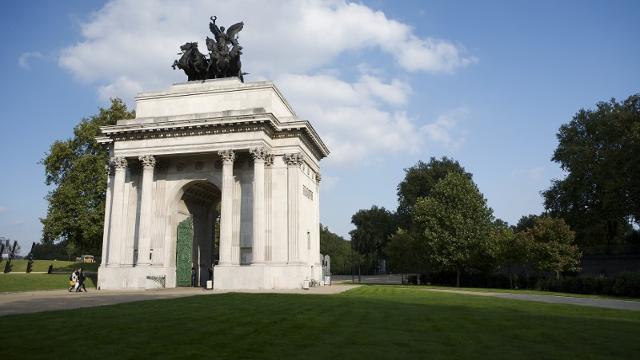 Both the Wellington Arch and Marble Arch (originally sited in front of Buckingham Palace) were planned in 1825 by George IV to commemorate Britain's victories in the Napoleonic Wars. The Wellington Arch was also conceived as an outer gateway to Constitution Hill and therefore a grand entrance into central London from the west. The presence of a turnpike gate at this point had led, in the 18th century, to a strong perception that this was the beginning of London (reflected in the nickname for Apsley House as "No 1, London") and the arch was intended to reflect the importance of the position.
The arch was built between 1826 and 1830 to a design by Decimus Burton. It was planned as part of a single composition with Burton's screen that forms the Hyde Park Corner entrance to Hyde Park. The arch was originally positioned directly to the south of the screen, with the end of Constitution Hill re-aligned to meet it squarely, to form a corresponding entrance to a grand ceremonial route towards Buckingham Palace. Apsley House, the London residence of the Duke of Wellington, adjoins the screen.
The arch has a single opening, and uses the Corinthian order. Much of the intended exterior ornamentation was omitted as a cost-saving exercise necessitated by the King's overspending on the refurbishment of Buckingham Palace, which was underway at the same time. A contemporary account, written in anticipation of its completion to its original plan, describes what was intended.

The entabulature is loft and elegant with a richly sculptured frieze, and a row of boldly projecting lions' heads on the cymatium, marking the centres of columns and other sub-divisions of the order. Above the entablature, on a lofty blocking course, is raised an attic, the body of which is embellished with a sculptural representation of an ancient triumph. On each of the columns is a statue of a warrior, and on the summit of the acroterium which surmounts the attic is a figure in a quadriga or ancient four horse chariot. 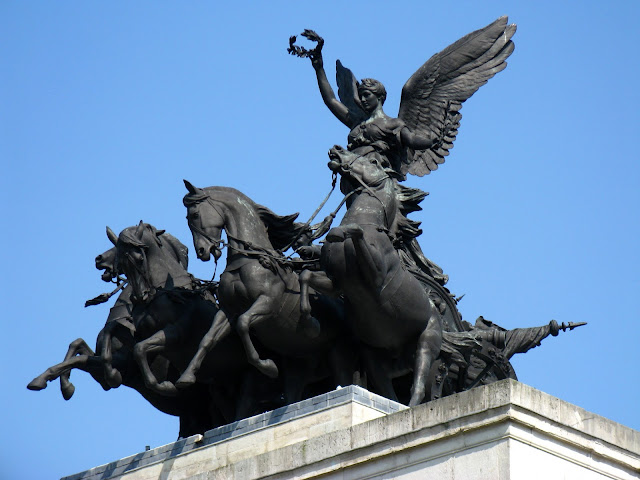 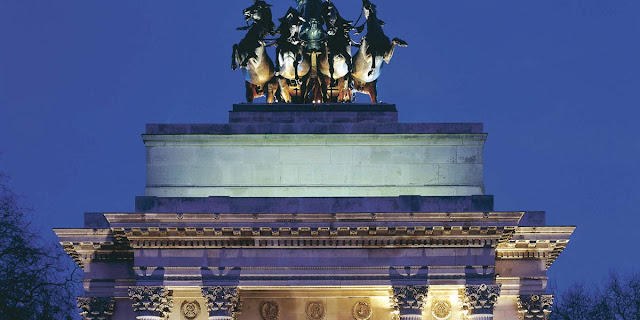