Winners of this year’s Architecture in Schools competition will be announced at Canary Wharf ’s East Wintergarden where primary school pupils will showcase their designs for a ‘Smarter City’.
On the evening of the 19th of July hundreds of parents, teachers, architects and schoolchildren will gather to celebrate pupil’s achievements at an awards ceremony and exhibition hosted by programme sponsor Canary Wharf Group plc at its stunning East Wintergarden venue.

As well as receiving prizes for their work, the children will be able to see professional architectural models of the top three submissions created by top model making company, Kandor Modelmakers. These models will remain on display at Canary Wharf ’s Crossrail Roof Garden for public viewing.

That encourage life-long learning, integrated and imaginative spaces to work, play and socialise, and the use of new technologies to combat problems linked to climate change and pollution. Top London practices including Foster + Partners, Allford Hall Monaghan Morris and Jestico + Whiles were among the architects leading the design collaboration with the pupils.

The winning designs include re-designs of the Museum of Childhood in Bethnal Green and surrounding public space, Timbercroft Primary School, and Walthamstow Central. These designs include a revitalised park with accessible and pedestrian walkways, a community cafe, a retro fairground, an extended museum and a homeless shelter, as well as a school with facilities to attract and nurture local wildlife and sensory rooms to improve children’s emotional and mental well-being along with a central area with eco-friendly bike hubs, pedestrian pathways with games, creative areas for performances and skill-sharing alongside rooftop football pitches, free and outdoor swimming pools, and interesting seating areas. 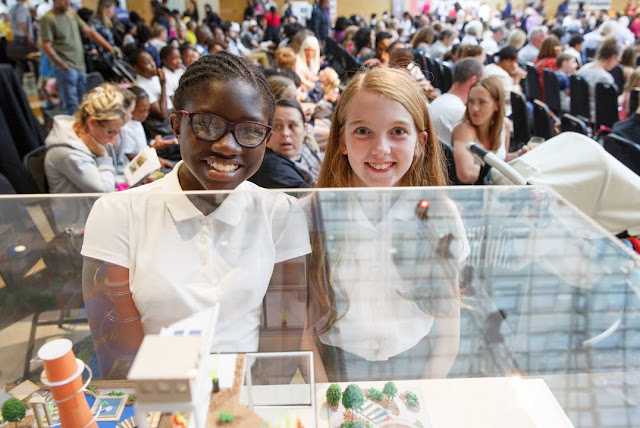