The third film in the newly-rebooted Star Trek franchise, the crew of USS Enterprise find themselves in the middle of a crisis once again, when the ship and crew are attacked by a wave of unknown aliens.

Leaving them stranded on a planet they know nothing about, Captain James T. Kirk and co. must overcome an enemy more fearful than ever before, while they try to work out a way to get off this world.
But with their ship destroyed, how will the crew be able to find their way off the planet and back on course?
Star Trek Beyond once again features Chris Pine (Rise of the Guardians) as Captain James T. Kirk, while support is provided by all the staple crew members that would be expected to line up alongside their leader.
Zachary Quinto (Hitman: Agent 47) reprises his role as Spock, while Simon Pegg (Ice Age: Collision Course) stars as Scotty.Justin Lin (Fast & Furious 6) replaces J. J. Abrams at the helm of the third film in the rebooted franchise, while the latter stays on as producer. 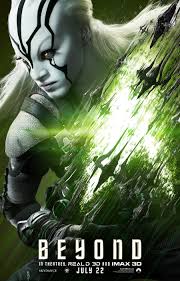