The Royal Mews is situated next to Buckingham Palace in London.

. The Royal Mews is situated next to Buckingham Palace in London. It evolved from the King's Mews at Charing Cross which was established by Richard II and was originally where the royal hunting hawks were housed. Nowadays the Mews is one of the finest working stables in existence, responsible for all aspects of road travel for The Queen and members of the Royal Family and you can see the horses, coaches and cars on your visit.

Among the dazzling coaches and carriages on display in the Royal Mews are the Diamond Jubilee State Coach used by The Queen to travel to the State Opening of Parliament, the Glass Coach, in which royal brides, including The Queen when Princess Elizabeth, have travelled on their wedding day, and the 1902 State Landau which The Duke and Duchess of Cambridge used to travel to Buckingham Palace after their wedding at Westminster Abbey in 2011.
Queen Victoria had forbidden cars from being used at the Mews, calling them "those horrible machines". However by 1920 King George V had converted two coach houses into garages for the royal Daimlers. Today there are seven limousines in the Royal Mews.
Don't forget to say hello to any of the horses currently stabled at the Mews too! 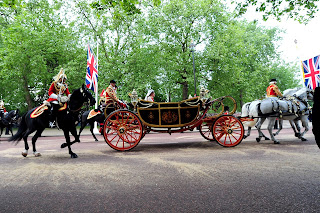 See the grooms in action

In addition to the historic vehicles on display, visitors can witness the daily work of the Royal Mews staff, from the feeding, exercising, mucking out and training of the Windsor Greys and Cleveland Bays, to the work that takes place in the harness room throughout the day. Visitors may also see the messenger Brougham carriage that sets out daily from the Mews to transfer post between royal residences, a task that has taken place since 1843. 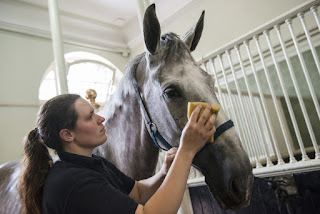 Experience what it feels like to step into a royal carriage in the State Stables. The model landau inspired by the Semi-State Landau and decorated in a royal carriage livery is a perfect photo opportunity. Share your photos with us using #SitInStyle.
Also recently installed in the State Stables are new interactive displays for families, which give children the opportunity to learn how to harness a horse and to dress up as a footman in specially created livery.
Activities for children are available on various weekends and throughout the summer. See the What's On event listings for more details.
Book Tickets