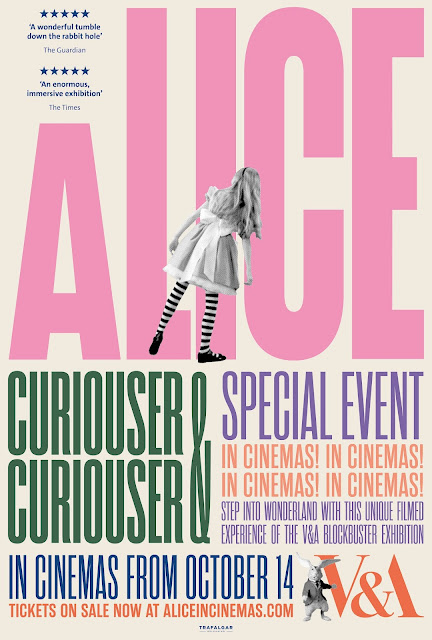 New guest contributors announced for big screen adaptation of V&A’s blockbuster exhibition Alice: Curiouser and Curiouser Cinemas nationwide from 14th October 2021
Additional guest contributors Bob Crowley, the Costume and Set Designer, and milliner Stephen Jones have been announced for The V&A presents Alice: Curiouser and Curiouser exhibition documentary, directed by Dione Orrom and Matt Askem. This unique filmed experience of the V&A’s landmark 2021 exhibition will be screened in selected cinemas nationwide from 14th October, marking the museum’s first exhibition to be adapted for the big screen since its globally sold-out David Bowie Is show.
Produced by Trafalgar Releasing, the leading international Event Cinema distributor, this special cinema event will give Alice fans worldwide the opportunity to discover more about the book’s evolution from manuscript to global phenomenon and enjoy the V&A’s blockbuster exhibition at their local cinema.
Presented by V&A Senior Curator Kate Bailey and broadcaster Andi Oliver, this entertaining and informative private view of the exhibition has been filmed especially for the big screen with stunning close-ups of key objects and insightful interviews. The production team worked with composer James Pickering and Exhibition sound designer Gareth Fry to create an atmospheric soundtrack for the film, capturing the surreal dreaminess of a Wonderland adventure.
Guest contributors Peter Blake and Ralph Steadman have already been announced and they will be joined by Bob Crowley, the Costume and Set Designer, and milliner Stephen Jones, alongside Kinetic Artist Anthony Howe and Artist and Costume designer Iris van Herpen, helping to unravel the multifaceted cultural creations and interpretations that Alice in Wonderland has inspired.
The role of young Alice, played by Olivia Wells, adds a new dimension to the exhibition film format as Director Dione Orrom explains: We wanted to find a dynamic, visual way to interact with the exhibition, to help bring the experience of being in the live space to the screen. We also wanted to show different layers of reality and to bring in an element of the magical, and that is how the idea of having our own Alice in the space developed. We then discussed who our Alice would be and considered some different actors– Olivia just jumped out as being the right person.
The V&A is the first museum to fully explore the cultural impact of Alice in Wonderland and its ongoing inspiration for leading creatives, from Salvador Dalí to Tim Burton, Vivienne Westwood and Little Simz. Cinema audiences will be transported into the V&A’s wonderful world of wonderland designed by award-winning theatre designer Tom Piper: five Alice-inspired worlds arranged thematically, spanning film, performance, fashion, art, music and photography.
Kate Bailey, Senior Curator, Design and Scenography at the V&A and curator of Alice: Curiouser and Curiouser, commented: Creating a film of Alice’s exhibition Adventures is a dream and an incredible way of sharing the experience with audiences who are unable to visit the exhibition in London. Curating an exhibition is years of research and a cinema film is a great way of capturing the bigger picture. It provides an exciting opportunity to delve deeper into the impact and legacy of Alice, sharing unseen and extraordinary insights into the imagination of artists and designers creating Wonderlands. It was particularly special to walk through the exhibition with Andi Oliver, following Alice’s journey across time, place and media. Together we explore how and why Alice, with her brave, curious and questioning character, continues to inspire us and audiences across the world.
The UK cinema release will be followed by international screenings in 2022. Marc Allenby, CEO of Trafalgar Releasing comments: “Alice has been an inspiration for generations and is an icon for today. We’re delighted to be partnering with the V&A to bring this ground-breaking exhibition to a global cinema audience.”
The V&A presents Alice: Curiouser and Curiouser will be screening at selected Cineworld, Curzon, Empire, Everyman, Light, Picturehouse, Odeon, Showcase, Vue and independent cinemas nationwide from 14th October 2021.
Posted by Visit Stonehenge at 12:24:00 pm