A lock of hair belonging to master composer Mozart is expected to fetch £10,000 when it goes up for auction. 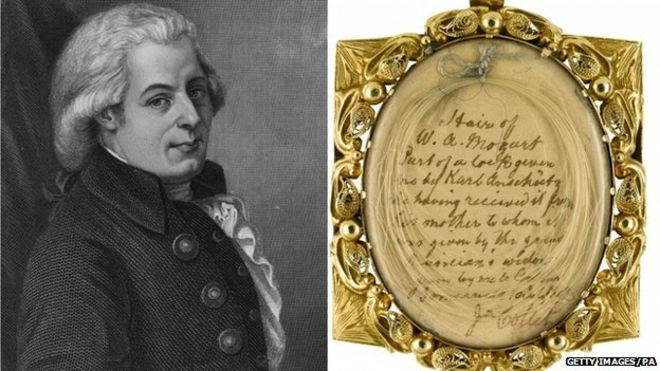 Sotheby's has valued Wolfgang Amadeus Mozart's hair, dating back to 1791, at £10,000 ahead of Thursday's sale.
A small lock of Ludwig van Beethoven's hair and a printed invitation to the German's 1827 funeral are also being sold. They have been estimated to reach £2,000.
The lots will be on public display in central London until Wednesday.
Locks of hair were frequently taken as keepsakes from the bodies of recently deceased composers,
Mozart's has been kept in a gilt locket and was passed from his widow Contanze to the German conductor Karl Anschutz before being given to English composer Arthur Sommervell.
The Austrian died after composing operas such as the Magic Flute and The Marriage of Figaro.
In 2002, a lock of Mozart's hair was sold for £38,240 at auction - double the pre-sale estimate.
Source BBC News
Posted by All About London at 3:20:00 pm