The miracle of the 20-week strawberry season

.The UK strawberry industry is expected to smash its sales record this year by £50m, a record it only set last year. What's behind the blooming strawberry? 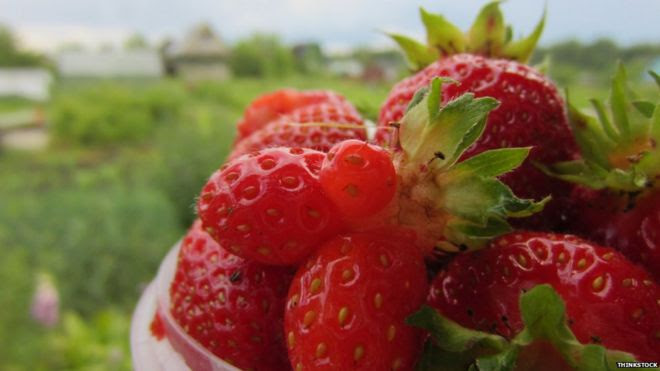 In 1990 the British strawberry season lasted about six weeks. Now it typically stretches from May to October - about 20 weeks.
And that's just the official season, which marks the point when supermarkets are stocked 100% with British strawberries - replacing foreign imports from the likes of Israel, Jordan, Morocco and Spain.
These countries have an inherent advantage over the UK - a warmer, sunnier climate.
But British strawberry growers have been innovatively trying to squeeze every last strawberry from the UK's unpredictable climate.
And last year there were still British strawberries on the shelves in December for the first time.
Growers predict 2015 will be even better. Strawberries are expected to fetch £325m this year, easily beating 2014's record total of £275m, according to British Summer Fruits (BSF), which represents 98% of berry growers that supply supermarkets.
They estimate that 76,000 tonnes will be produced this year - a 12,000-tonne increase on last year alone - while production has increased by 36% in the past five years, according to the BSF.
The principal reason for this is both clear and controversial - polytunnels. These flexible greenhouses - with their curved metal girders and polythene covers - have spread out over large swathes of the British countryside.
In 1990 there were none. Now they account for some 95% of all berries grown outdoors, says Laurence Olins, chairman of BSF.
The tunnels are far from universally adored. Locals have fought numerous battles against their introduction, mainly criticising them for blotting the landscape.
But while they'll rarely win beauty contests, they've had a massive impact on strawberries.
"Polytunnels are like putting an umbrella over a crop - [it] protects the crop from pests, diseases, rain and climate [damage]," Olins explains.
It's also warmer than outside by several degrees, he adds, accelerating plant growth. "You can put bees in there for pollination, you can put predator insects in there to eat pests - it's a controlled climate without artificial heat or light."
Strawberry farmer Paul Kelsey first installed the tunnels on his 19.5-hectare farm in Kent about six years ago. All 600 tonnes he produces on his medium-sized farm every season are grown under them.
"They have been the single biggest driver of the strawberry industry's growth," he says.
There have been other innovations too.
"When I first started growing 30 years ago we were planting straight into the soil with nothing around it," says Kelsey.
Now he grows them at waist level, known as "table top" production, says Kelsey. It accounts for about 30-40% of the industry, Olins says, and mainly suits those who, like Kelsey, don't have enough space to rotate their crops on different fields.
Strawberries are planted in suspended grow bags, often using something called coconut coir. It's a natural fibre taken from the husk of a coconut, which is then compressed into compost that has good water retention.
The table tops make it easier for strawberry pickers, allowing them to stand rather than bend and kneel, which also makes them more productive, Kelsey says.
But climate has played its part in production too - both controlled and natural.
A mild autumn in 2014 provided the ideal starting conditions for this year's crop, Olins says. "We then had a very mild winter indeed, with record levels of sunlight."
About 200 hours of winter sunlight enabled a higher rate of photosynthesis, producing a sweeter crop high in natural sugars. 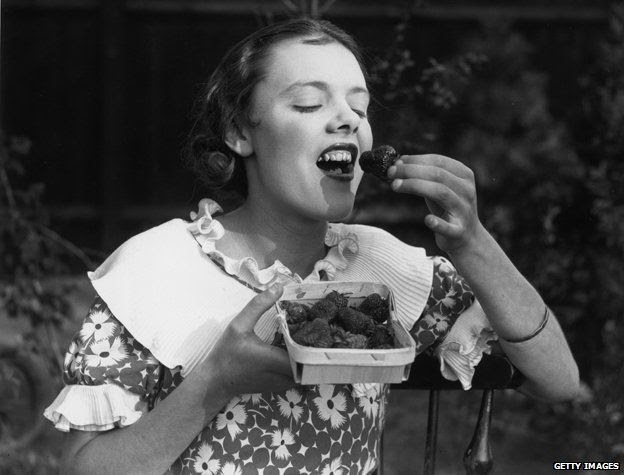 Relatively warm and sunny spring days, coupled with cold nights, allowed a healthy balance of growth and rest, Olins explains.
But historically strawberries have been subject to the whims of an unpredictable climate. Even just three years ago, bad weather threatened to ruin a whole season.
Wild strawberries have a very long history, says food historian Dr Annie Gray. "They were used by the Romans, there are medieval recipes for them, but these strawberries were very different from what we're used to today."
Although cross-breeding had already existed in Europe, the modern strawberry only emerged when it was bred with a South American species brought back by a French spy after a visit to Chile in 1712.
Posted by All About London at 5:12:00 pm