Hundreds of people have taken part in a rally in Trafalgar Square against plans to privatise the National Gallery. 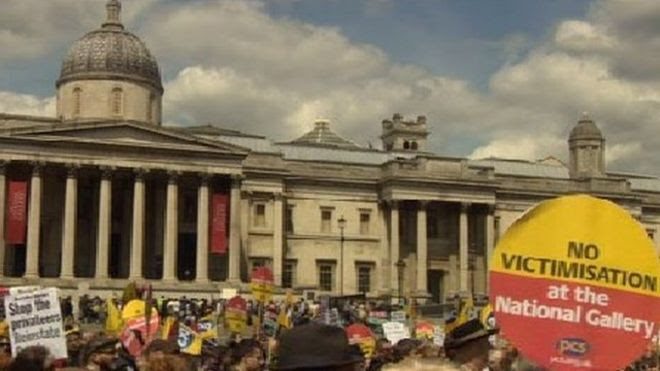 Around 200 members of the Public and Commercial Services (PCS) union are in the middle of a ten-day strike, which affected the half-term holiday.
There will have been 34 days of action on Thursday since February, but the current strike is the longest so far.
Film maker Ken Loach and Turner Prize-winning artist Mark Wallinger supported the rally.
Mr Wallinger told the crowds: "In this world arts and music are given no value and our great cultural institutions are viewed as unproductive corporations and the rights of the people who work there are being cut out by this government."
The PCS said the action was against plans to privatise 400 visitor services roles and the dismissal of union rep Candy Udwin, who was accused of sharing information about the use of a private security firm.
More than 21,000 people have added their names to a statement calling for Ms Udwin to be reinstated.
Artists Grayson Perry, Mark Wallinger, Ryan Gander and Peter Kennard have signed a separate letter calling for a halt to privatisation plans, according to the union.
PCS general secretary Mark Serwotka said: "The National Gallery is a much-loved institution and it must be stopped from damaging its own reputation."
The gallery, where government aid makes up nearly three quarters of its funding, said privatisation plans would enable it to introduce a new roster to "operate more flexibly", adding there would be no job cuts.
"We believe the proposed changes are essential to enable us to deliver an enhanced service to our six million annual visitors for many years to come, and to remain as one of the world's leading art galleries," a gallery statement said.
"In addition, the National Gallery has just announced it will pay the London Living Wage."
With regards to the dismissal of Ms Udwin, the gallery, which is owned and operated by the National Gallery Trust, said it did not comment on individual disciplinary cases.
The latest strike started on 26 May and is due to end on 4 June.
BBC News
Posted by All About London at 11:24:00 am