Every year there are millions of visitors to 11,000 acres of green space run by the City of London Corporation. 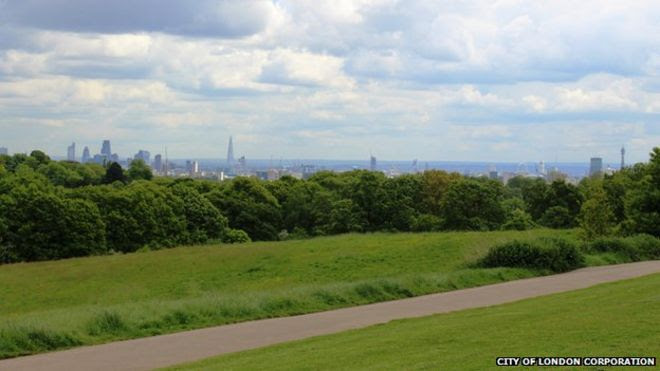 Despite the obvious pleasure it brings to visitors, the corporation is hoping London Tree Week (23 to 30 May) will not only be a celebration of its parks and ancient woodland, but also draw attention to some of the very real challenges it faces.
Sue Ireland, director of Green Spaces, says despite the deadly fungus ash dieback hitting the headlines in 2012 and 2013 the problem has definitely not gone away.
"Tackling ash dieback is very much at the forefront of our minds. We've identified it in parts of London and because it is windborne it is spreading to other areas of the capital. It is a question of when, not if.
"The question is 'how will we attack it?'. Kew Gardens has been invaluable in helping us learn about the challenges and what the impact will be on our ash trees. Nature is good at helping us resolve issues - we just want to help nature move a bit faster."
Another threat is to the capital's most populous tree - the London plane tree.
Ms Ireland says there are more species of plane tree than any other in London's streets and parks, and from a diversity point of view it is not a good thing because a disease outbreak could kill off a huge population of them.
"Limbs are dropping off plane trees because of the Massaria fungus. It causes large lesions on the upper surfaces of major branches. When there is a variation in the climate it feels under threat. A tree can take just three months between the fungus showing and for limbs to drop off. It's that quick."
The corporation manages a vast number of parks and woodland, from world-famous Hampstead Heath to Epping Forest - which is 6,000 acres of ancient woodland straddling north-east Greater London and Essex.
The running of London's green spaces is not immune to the world around it, and the economic crisis and subsequent local authority cuts mean it is under just as much pressure as any public service.
"Like the libraries, we are not a statutory service and across London our open spaces are under pressure. Just managing the threat of Massaria costs tens of thousands of pounds," Ms Ireland says.
To protect the future of the parks and woodland she says it is vital to invest in the future workforce.
"We work hard to bring in apprentices to train and develop the skills to look after our ancient woodland and trees for the generations to come."