An assault rifle used in seven unsolved murders has been discovered on public display at the Imperial War Museum. 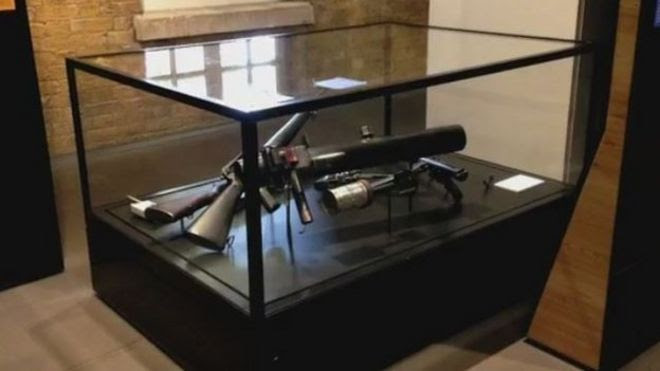 BBC Panorama has learned that investigators re-examining paramilitary murders in Northern Ireland found the gun on display in an exhibit on the Troubles.
The families of the murder victims had previously been told by the police that they had disposed of the weapon.
A senior officer says the Police Service of Northern Ireland fully supports an investigation into its history.
Forensic tests conducted in the 1990s showed the rifle was one of two weapons used in an attack on a Belfast betting shop in 1992.
Five Catholics, including a 15-year-old boy, were killed in the attack on the Ormeau Road by Protestant paramilitaries.

The rifle has also been linked to the unsolved murders of two other men in 1988.
The weapon was originally recovered by the police in 1992, but officers from the Historical Enquiries Team (HET) were unable to locate the gun when they reopened the unsolved murder cases.
Families were told that the VZ58 rifle had been officially "disposed of", but investigators from Northern Ireland's Police Ombudsman's team found the gun at the museum and have sent it for further tests.
Assistant Chief Constable Will Kerr said the Police Service of Northern Ireland would fully support the ombudsman investigation.
"I have been made aware that investigators from the Police Ombudsman's office have recovered a weapon on loan from police in Northern Ireland to the Imperial War Museum in London as part of a permanent exhibition relating to 'the Troubles'. In the interests of public confidence and transparency, I accept that it merits further investigation."
A spokeswoman for the Imperial War Museum (IWM) said it was given the gun by the Royal Ulster Constabulary Weapons and Explosives Research Centre.
"IWM believes that we provide an appropriate context for the display of items used in conflict. This object has always been displayed in the context of a wider story which sets it against other items from both sides of the Northern Ireland conflict."
She said the museum was told that the weapons it received could have been used in "specific events", but it wasn't given any details of what those events were.
The museum is now working with the police ombudsman to try to work out whether there are any other weapons from unsolved murders in its collection.
Billy McManus, whose father Willie was killed in the betting shop shooting, says the murder weapon should never have been treated as a museum exhibit.

He said: "I am absolutely shocked that a gun connected with so many deaths was there on display for anyone to come and see at the Imperial War Museum in London. It should be here in a secure place so that it can be used for ballistics.
"Why would somebody let something so important be shipped to England to be put on display? What does that say about their treatment of the case? They just don't care."
The families of those killed at the bookmakers have long believed that the security forces colluded in the attack.
Earlier police investigations have already established that the second murder weapon - a hand gun - was given to the paramilitaries by a soldier at an army barracks.
An informant in the terror group later handed the gun in to his police handlers. The police claim they deactivated it before giving it back to their agent, but the pistol was working when it was used in the attack on the Belfast betting shop.
BBC News
Posted by All About London at 10:13:00 am