Ten pieces of artwork of London and why we love them

Monet: Houses of Parliament, London, Sun Breaking Through the Fog 1904 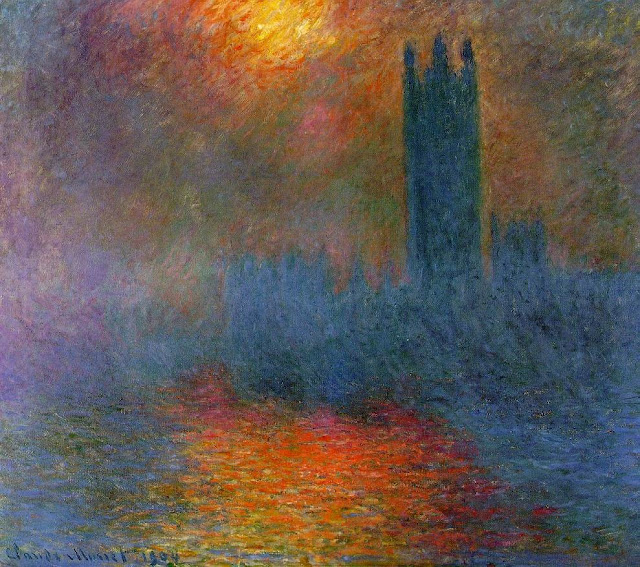 Despite the impressionist nature of Monet’s painting, the image is instantly identifiable. The Houses of Parliament emerge as though the viewer is seeing them through the fog of the Thames. Many images of the Houses of Parliament are inextricable from the building’s political role, but we like Monet’s version, because it presents this icon in terms of its shape and form, rather than its function. This picture is one of several that the French artist painted of this part of London, and all have a somewhat different atmosphere. 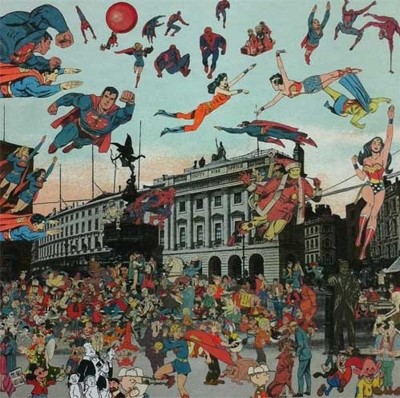 Peter Blake, also known as the Godfather of Pop Art, is best known for his illustration of the Beatles’ Sergeant Pepper’s Lonely Heart Club Band album cover. We love the fun aspect of this print, and the combination of reality and fantasy as Piccadilly Square is overrun with our favourite all-time comic book superheroes. There’s so much going on, that you can stare at it for ages, picking out characters from Mickey Mouse to Spiderman – or rather Spidermen, as there are whole clans of the same heroes competing for space. 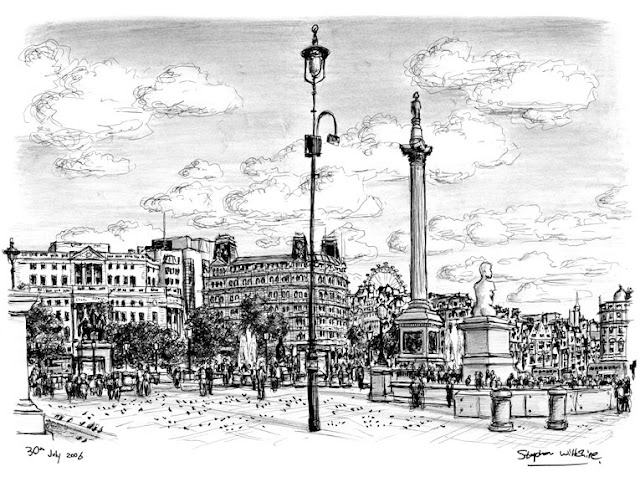 Stephen Wiltshire is a British artist who paints cityscapes, having come to the attention of the art world after seeming to paint great panoramas almost from memory. Stephen, born in 1974, studied Fine Art at the City & Guilds Art College, and has had his own London gallery for ten years. As a child he was mute, using drawing to communicate, and was diagnosed as autistic at three years old. This picture was drawn on the spot at Trafalgar Square, with a growing crowd around the artist. 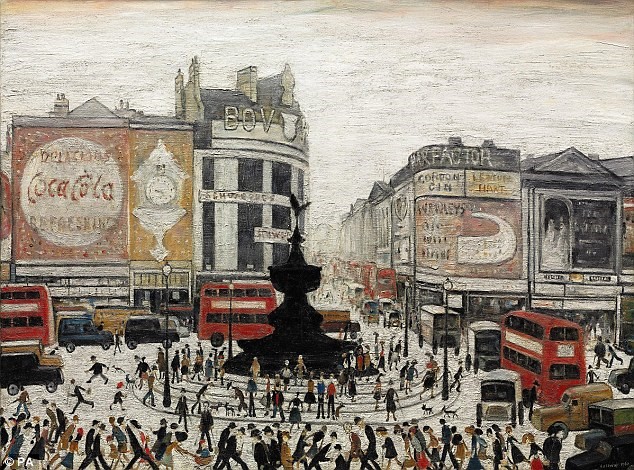 L.S. Lowry is most famous for his ‘matchstick’ figures of northern mill towns, particularly Salford, but in 1960 he painted this one of Piccadilly Circus. The artist manages to combine the ‘flatness’ of the image with a bustling atmosphere as the people in the picture run and hurry across the road. We love this one because it captures the feel of the time with the style of the vehicles and the Coca-Cola and Bovril adverts on the buildings. The painting sold in 2011 at Christie’s for £5.6 million 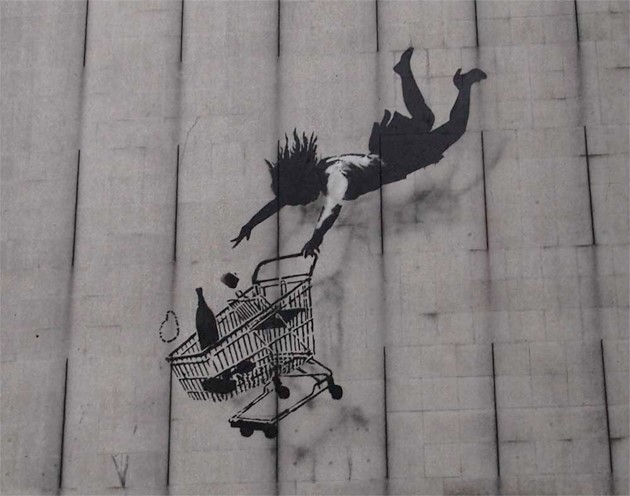 Ok, so this is rather a painting on London rather than of London, but that’s not going to hold us back.  The only problem was deciding which of the street artist Banksy images to choose. We opted for this one, Shop Until You Drop in Mayfair. Despite the trademark silhouette, the shadow on the wall makes you do a double take, as though someone is really falling down the side of the building. Banksy started out in the Bristol underground street art scene. As graffiti is illegal, the artist has always kept his identity under wraps. 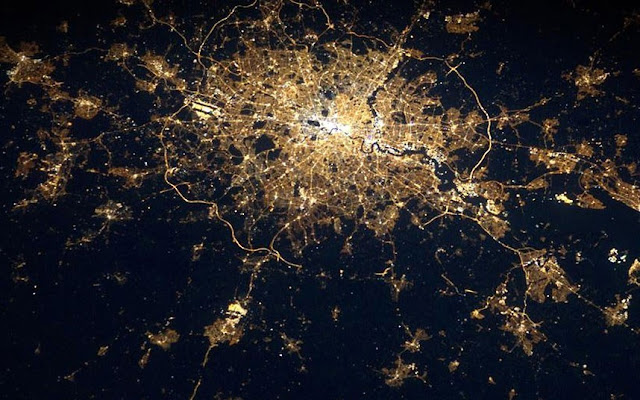 This image of London, taken from the International Space Station, makes the city look like an exploding star. The clarity of the layout of the city, with the Thames worming its way in – or out – on the left couldn’t be anywhere else on Earth. Even the M25 looks beautiful… We love this picture because it reminds us to take a step back when we’re in the middle of the noise and rush of the city, and that scale is all relative. This image was just one of many tweeted back to earth by the astronomer, from his Twitter account @astro_andre. 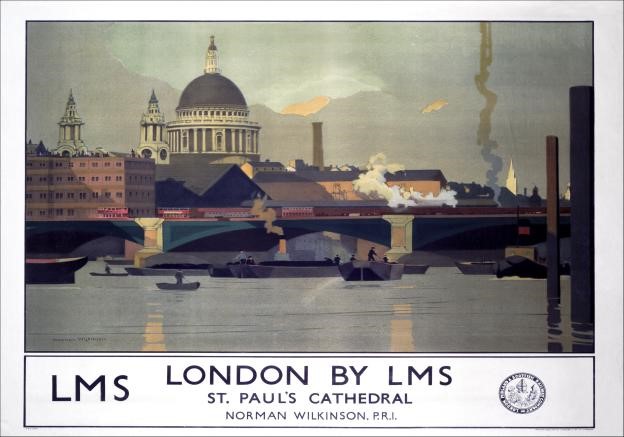 The travel posters of the late nineteenth to early/mid twentieth century encapsulated the romanticism of train travel, with posters such as this one adorning railway stations throughout the country. The simple, often ‘cut-out’ style became associated with rail travel, with trained artist Norman Wilkinson designing many of them, including this one. Posters were usually of rural areas, encouraging travellers on day trips to the newly popular countryside or coastal areas and away from their urban, industrial lives; however, this one of St Paul’s Cathedral shows that the capital has always been a focus for tourism.

J.M.W. Turner: The Burning of the Houses of Parliament, 1834 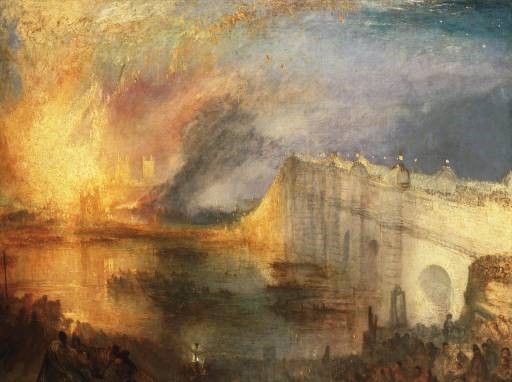 JMW Turner (1755–1851) is the celebrated artist of the British countryside, renowned for both watercolour and oil paintings.  However, he was also fascinated by architecture, and hence his focus on London in a number of his paintings. The burning of the Houses of Parliament did actually occur, in 1834, and during the event Turner hired a boat so that he could witness the event from various angles before heading back to his studio to paint it. This is one of our favourite depictions of London, with the ferocity and intensity of colours not usually associated with the Palace of Westminster. 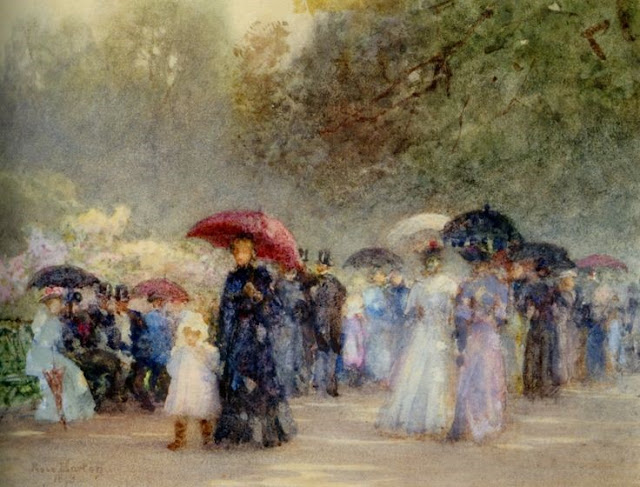 This painting is by Rose Mary Barton, and we love it for its reminder of Hyde Park in times gone by. No matter that the images are blurred and faces indistinguishable; the gentle stroll of women and children, and socialising of gentlemen on benches and on the paths invite us to wonder about their lives and a vastly different world, yet one that is not so long ago: perhaps the woman at the front in black is a widow; and where are the rest of the population, the ones without the parasols and expensive clothes? 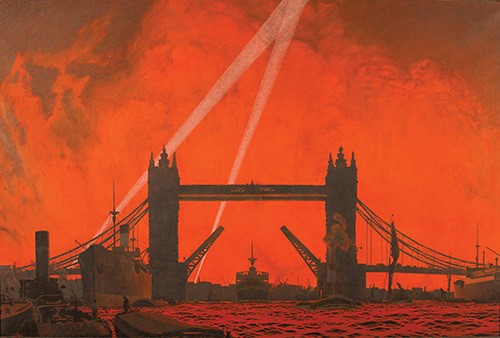 This striking image of Tower Bridge shows the searchlights, the ships, and the glowing sky of a Second World War attack. Without knowing the context you could be tempted to believe this is a modern, perhaps computer-generated image rather than a painting from the time, which is one of several on a similar theme by the artist. In just a glance the image serves to remind us of the terror that London, like other cities in Britain, and its residents went through at night in this war.
Author: Ahmed Alansari from Morgan Pryce, specialists in office space in Covent Garden, Holborn andVictoria.