Hamlet at the Trafalgar Studio Two 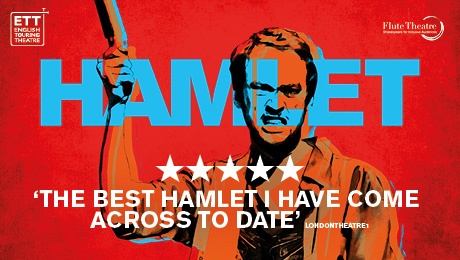 Flute Theatre Company’s critically-acclaimed adaptation of Shakespeare’s Hamlet comes to the intimate space of Trafalgar Studios 2 this December in a co-production with English Touring Theatre.
This thrilling and bold production makes its West End premiere after wowing audiences across Europe.
Flute Theatre's Hamlet delves deep into the divided self of the protagonist. The unique company of just 6 actors keep the essence of Shakespeare’s tragedy, condensing the action into the single, bloody night of Hamlet’s mother’s wedding. By dawn only a gravedigger will be alive…
This is Hamlet as you’ve never seen before.
Previous English Touring Theatre productions include the winner of ‘Best Touring Production’ at the 2016 UK Theatre Awards, The Herbal Bed (‘A stirring evening’ ★★★★ Guardian) and the World Premiere productions of Brideshead Revisited and Lady Chatterley’s Lover (★★★★ Daily Mail).
What The Papers Say
"The best Hamlet I have come across to date"- London Theatre1

"Raw and riveting minimalist adaptation of Shakespeare’s quintessential tragedy"- The Stage
"One of the most interesting and powerful interpretations of Hamlet yet."- PlaysToSee.com
"An engrossing Hamlet that can make you feel like you’ve never seen it before"- Evening Theatre
Posted by All About London at 9:15:00 pm