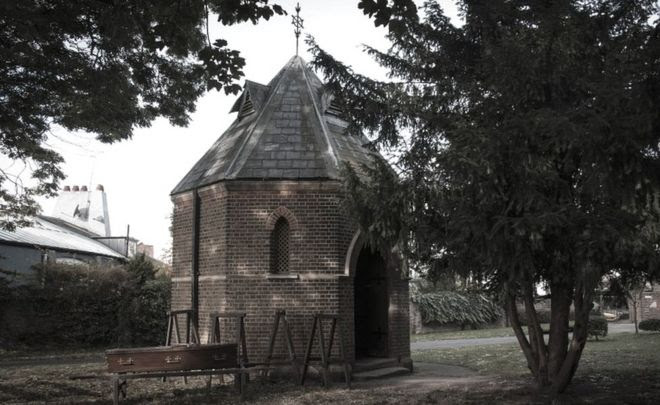 A cemetery's unique Victorian reception house which stored coffins to stop poor people keeping bodies in their homes, has been given protected status.
The building in Hammersmith's Margravine Cemetery, London created in 1869, has been given Grade II listing.
Families unable to immediately pay for a burial previously used to keep dead relatives in their homes, contributing to cholera outbreaks in the city.
Historic England said the store was "ghoulish and absolutely fascinating".
Director of listing Roger Bowdler said many had to keep their relatives' bodies in their small cramped homes during the early 1800s, "so you've got the living cheek-by-jowl with the dead".
The small octagonal building used for holding the dead before funerals, was an example of the facilities proposed by Edwin Chadwick, secretary to the Poor Law Commission, who led a review of sanitary conditions.
The store also addressed people's fears that their relatives would be buried before they had actually died.
The use of reception houses was phased out with the introduction of undertakers in the 1880s and the building is the sole survivor of its kind in the capital, according to Historic England.
Heritage minister Tracey Crouch said the building was "an important part of London's history" as it "gives us a glimpse into how cholera outbreaks changed Victorian attitudes to burials and public health."
Receiving the listing could help secure funding for any conservation work on the reception house.
Posted by All About London at 1:04:00 pm