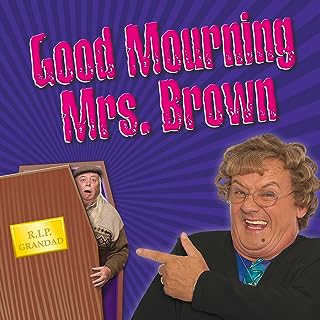 Voted as the Best British Sitcom of the 21st century by the Radio Times, Mrs. Brown’s Boys will make a triumphant return to UK and Ireland arenas in 2017, including a stop at the London O2 Arena after a sell-out tour of Australia and New Zealand. Good Mourning Mrs. Brown is part of the sidesplitting series written by and starring Brendan O’Carroll.
Cathy tries her hand at relationship counselling, Father Quinn begins to doubt his vocation and the Brown family tackle the wake and funeral of Grandad Brown, but there is just one problem... Grandad Brown is not dead. With multiple awards and accolades including three National Television Awards, a TV Times Award and a TV BAFTA for Best Situation Comedy, the international success of Mrs Brown’s Boys is unmatched. Jam packed with its usual mayhem, crude jokes and original cast members, Good Mourning Mrs. Brown will evoke memorable moments from the hit TV series.
Buy Tickets
Posted by All About London at 6:00:00 pm