The Marksman in Bethnal Green is Michelin pub of the year 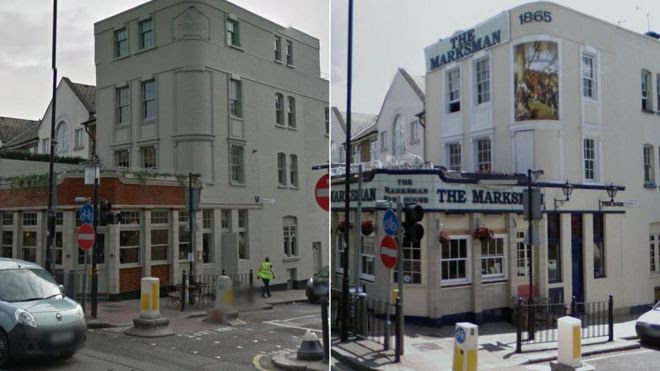 A "proper neighbourhood pub" in east London is the first in the capital to be named Michelin Pub of the Year.
The Marksman in Bethnal Green beat off competition from about 500 other establishments in Michelin's most recent Eating Out in Pubs Guide.
As well as being praised as a place to enjoy local ale, judges hailed its "new era" food, including devilled mussels and pheasant and trotter pie.
Chef owners Tom Harris and and Jon Rotheram said they were "thrilled".
The guide also made the Victorian pub a recipient of a Michelin Bib Gourmand, awarded to venues which offer good value and good quality cooking.
It was also praised for its regular events with guest chefs, live music and DJs, and its summer roof terrace.
Mr Harris - who previously worked at One Leicester Square - and Mr Rotheram - formerly a chef at Jamie Oliver's 15 - refurbished the pub after taking over ownership in 2015.
They were praised for their menus which included devilled mussels on toast, skate with shrimps and turnip tops, and pheasant and trotter pie.
The guide's editor, Rebecca Burr, said: "The Marksman cleverly combines a place to drink with new era pub food.
"One of the things we love about it is that it's a proper neighbourhood pub first and foremost, with a cosy, traditional bar in which to enjoy a pint of local ale or a bottle of craft beer."
Mr Rotheram said: "We're absolutely thrilled to have been crowned Michelin's Pub of the Year and this award is credit to the whole team who have worked so hard to create a pub that serves delicious food in a friendly, welcoming atmosphere.
"Needless to say we're incredibly proud."
Posted by All About London at 1:03:00 pm