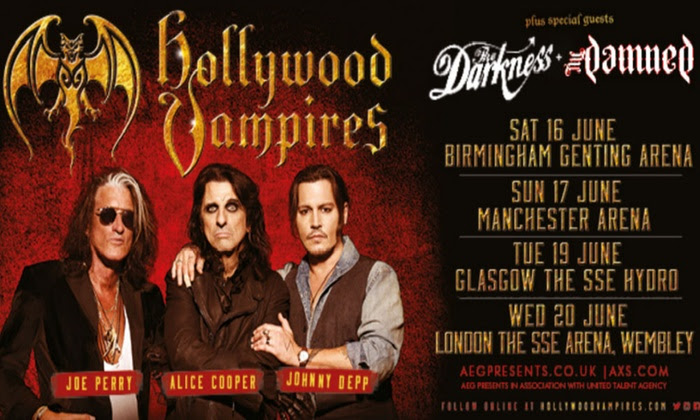 This June, the supergroup Hollywood Vampires, will visit the UK as a part of their European tour. The band consists of three members - Alice Cooper playing the harmonica and responsible for vocals, Johnny Depp playing the guitar and supporting Alice’s vocals, and Aerosmith’s Joe Perry wielding the guitar. The trio got their name from the celebrity drinking club that Cooper started in the 70s with the members including John Lennon, Jim Morrison, Ringo Starr, Keith Moon, and Micky Dolenz. Apart from their celebrity core, when the Vampires recorded their self-titled 2015 album, they welcomed Paul McCartney, Dave Grohl, Joe Walsh, and even Christopher Lee to the studio. The audiences can expect to hear some original tracks such as Dead Drunk Friends and Raise the Dead alongside classics such as My Generation and Whole Lotta Love.

Ticketing options:
Posted by All About London at 8:47:00 pm