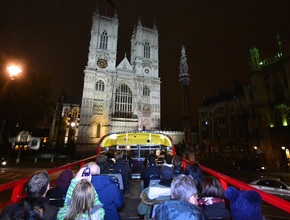 Travel back in time on a vintage open top double-decker bus, and walk through an empty Smithfield market, home to the cock-lane Ghost. Then retrace the murder sites of Jack the Ripper, before heading to the safety of the Sherlock Holmes pub.
Part 1: Open top drive through sinister and haunted LondonStep aboard our vintage open top bus to begin our journey through the dark and haunted streets of London. Hear tales of the legends buried at Westminster Abbey and see the banqueting house where Charles I was beheaded, a relatively common punishment for crime at the time. Your expert guide will explain how the executioners, who worked regularly in front of large crowds at Tower Hill which we will also see, would often raise the severed head showing it off to the crowd and that would often continue to twitch for several seconds after the brutal blows.  We then travel to the Old Bailey - the site of numerous public hangings, the Royal London Hospital where the Elephant Man lived, and hear tales of Mrs Lovett’s pie shop with her speciality fillings, the butcherous barber who lived next door and who would cut off more than just your hair; gangland warfare, great train robbers and more.
Part 2: Ghost walk through Smithfield marketStay close to our guide as we walk through a deserted Smithfield market and the surrounding cobbled streets. You’ll see the William Wallace plaque where Braveheart was tortured, and learn of the 19thcentury body snatchers who dug up local cemeteries ‘in the interests of science.’ Two of the most famous snatchers, John Bishop and Thomas Williams, were hanged at Newgate prison in front of several thousand boisterous Londoners. Then listen out for the scratching sounds of Fanny Lynes, the Cock Lane ghost, and hear her true story of death, sex, loan sharking, arsenic poisoning and séances. It all took place 250 years ago and has troubled the nation ever since.
Part 3: Jack the RipperAs the shadows lengthen, we approach London's East End, a hotbed of crime and vice in the 19th century. During the autumn of 1888, terror struck when Jack the Ripper came out of the fog and dimly lit alleys just long enough to stalk and butcher his five victims. At this point we leave the safety of the bus and walk his death trail inspecting the murder sites, deciphering the evidence and discussing his suspects. To this day the case remains unsolved. Come and investigate the case for yourself - who was Jack the Ripper?
Part 4: Fancy a nightcap?Then join us in the warmth of the Sherlock Holmes Pub. The pub also boasts a wide collection of the investigators memorabilia. Feeling hungry? The pub also has a wide variety of meals including a traditional fish and chip supper on offer which can be purchased from the bar. The tour ends at the Sherlock Holmes pub which is situated close to Trafalgar Square.

Please note:
·         Tour starts at 7 pm at Victoria Coach Station gate 0 and will finish approx. 9.30 pm at Trafalgar Square (Sherlock Holmes Pub)
·         This is a combination bus/walking tour and will finish at a traditional pub near Trafalgar Square. Some walking involved.
·         Not suitable for children under 12 years old
·         Please note that this is an open top bus tour - please be prepared for the possibility of rain.
·         On rare occasions, the open top bus may be changed to a closed top bus
View Details - Check Availability - Book This Tour
Posted by Friends of the Regent Palace at 2:56:00 pm