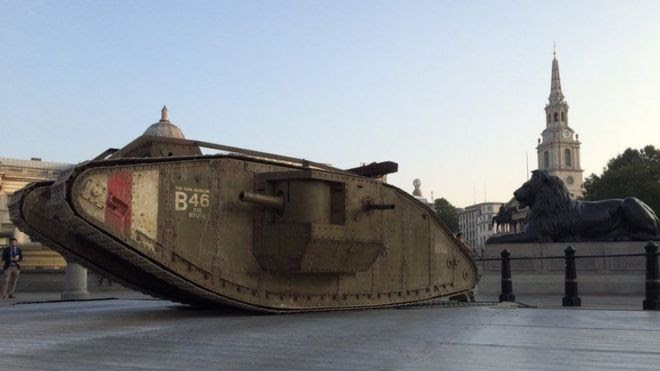 A replica of a World War One tank has been placed in Trafalgar Square tomark the 100th anniversary of the war machine.
The Mark IV tank, on which the replica is modelled, was first used in warfare in the Battle of the Somme on 15 September 1916.
With 57,000 casualties on the first day it is regarded as the bloodiest day in British military history.
The tank will be in position in the square until 11:00 BST.
David Willey, from Dorset's Tank Museum, which has provided the machine, said: "The British Army sent its new 'secret weapon' into action - and it did so in order to prevent the sort of casualties experienced on that first day of the battle."
Designed to travel at walking pace (3mph) to support the infantry, the plan was for 32 tanks to be involved in the first attack, but only 18 saw action because of mechanical failure or difficulties with the terrain.
During World War One, Trafalgar Square was used to host several Tank Banks, which were high profile fundraising events involving politicians and celebrities climbing aboard to deliver speeches.
A replica has been used to mark the event because none of the museum's collection of original tanks are able to run under their own power and cannot be transported long distances because of their age and fragility.
The replica was first used in Steven Spielberg's blockbuster Warhorse.
Posted by All About London at 11:53:00 am