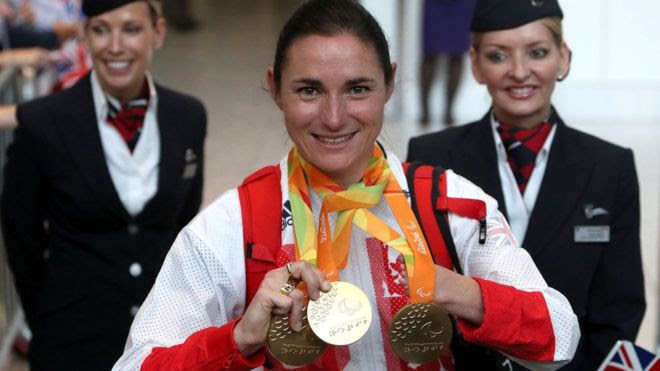 The Queen has praised the performance of Britain's Paralympics team at Rio 2016 as "magnificent" as the athletes returned to the UK on a special flight.
Parades to celebrate the country's Olympic and Paralympic success have been confirmed for Manchester on 17 October and London a day later.
Paralympic medallists were welcomed by fans and family who met their flight at London Heathrow on Tuesday morning.
GB won 147 medals, 64 of them gold, at the Paralympics and 67 Olympic medals.
Those included 27 Olympic gold medals. Both teams broke their medal tallies from London four years ago, hit their 2016 targets, and finished second in their medal tables.
As the Paralympics closed and athletes returned to their home countries, the Queen said: "I offer my warmest congratulations to the athletes of Great Britain and Northern Ireland, and indeed to the athletes of all Commonwealth countries, for their many successes in Rio de Janeiro.
"The magnificent performance of Paralympics GB this year reflects the talent and commitment of the athletes and their support teams.
"I send my good wishes to all those who have contributed to the success of these memorable Games."

Sports minister Tracey Crouch said the competitors had been an inspiration to millions and confirmed there would be two celebratory parades.
"I know that Manchester - a city with a rich sporting history - and London - with its strong links with the Olympic and Paralympic Games - will host brilliant celebrations that will give the British public a chance to say thank you to our amazing athlete heroes," she said.
Waiting for the athletes at Heathrow on Tuesday, double-gold medallist Kadeena Cox's sister Carmel Williams said: "We thought she was going to come back with some golds. But breaking a few world records that's a major achievement.
"I'm just excited to see her."
On board the flight, GB Para canoeist Anne Dickins observed "the world is better with bunting".
Her coach Phil Gunney was waiting for the gold medallist at the airport: "She's worked really hard and had a lot of challenges to get there," he said.
"We were confident she could make the podium... It was .2 of a second so I didn't know whether she had won at first. My reaction was very loud. I'm a driving instructor and I was sat with a student shouting at the iPad!"
And in the arrivals hall, Dame Sarah Storey, whose Paralympic career has seen her win multiple gold medals in swimming and cycling, said athletes boarded the plane early and in high spirits to "get into the champagne".

Reflecting on the team's success, she said: "We got off to a great start on day one, medals rolling in and everyone wants to be a part of that.
"We've had 20 years of great investment, then a home games. We wanted to continue the momentum and we smashed it."
She said her teammates performances, some across multiple sports, had given her "goosebumps" and said despite predictions of low crowds and safety concerns, the Paralympics in Brazil "just was brilliant".

The UK government is working with the British Olympic Association, the British Paralympic Association and both cities to finalise the details of the parades.
London Mayor Sadiq Khan tweeted that he was delighted to confirm a "heroes' return" for the country's Olympians and Paralympians.
Among the British Olympic successes in Rio were track cyclists Jason Kenny and Laura Trott, who between them won five golds, taking the couple's gold medal tally to 10.
Runner Mo Farah repeated his London 2012 double, winning gold in the men's 10,000m and 5,000m and swimmer Adam Peaty broke the world record as he won gold in the men's 100m breaststroke. He was the first British man to win an Olympic swimming gold medal since Adrian Moorhouse in 1988.
At the Paralympics, Dame Sarah Storey capped off a successful games by winning a third gold medal in the cycling road race, taking her career total to 14 across swimming and cycling.
Kadeena Cox won cycling gold and athletics gold, silver and bronze and was flagbearer in the closing ceremony while runner Jonnie Peacock took T44 100m gold.