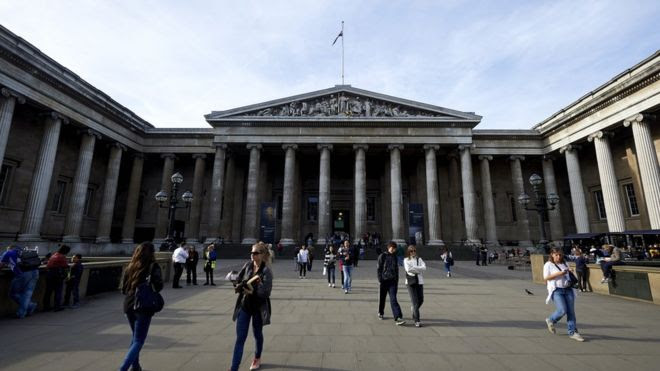 Some 6.8 million people visited the British Museum last year, up from 6.7 million the year before

Some 6.82 million people visited the British Museum last year, up from 6.7 million the year before.
The National Gallery remained in second place with 5.9 million visitors - although it suffered an 8% drop in visitor numbers - and in third place was The Natural History Museum with 5.3 million visitors.
The Southbank Centre and Tate Modern both suffered sizable falls in their visitor numbers with 18% and 19% drops respectively.
Tate Modern's 4.7 million visitors was the lowest for 10 years, but figures are expected to improve this year following a high profile Georgia O'Keeffe exhibition and the opening of the venue's extension this summer.
"Tate Modern continues to be the world's most popular gallery of modern and contemporary art," a spokeswoman said.
"We annually attract around 4.5 to five million visitors. We achieved our highest, record-breaking year in 2014 with 5.8 million visitors, due in part to the success of Henri Matisse: The Cut-Outs."
Temporary exhibitions were credited with giving a boost in visitors to a number of attractions including London's Somerset House, which saw the largest increase in visitor numbers in the top 10.
It had an increase of 31% and came in eighth place with 3.2 million visitors.
The Royal Academy credited its 33% increase in visitors to its Ai Weiwei and summer exhibitions.
Meanwhile, the Victoria and Albert Museum's visitor figures was boosted by its most visited exhibition ever, Alexander McQueen: Savage Beauty.
Audrey Hepburn: Portraits of an Icon was also a huge draw at the National Portrait Gallery.
Bernard Donoghue, director of the Association of Leading Visitor Attractions, said it was a record year for visitors from overseas and the UK.
"More people visited the V&A, the Natural History Museum and the Science Museum, combined, than visited Venice," he said.
"More people visited the British Museum and the National Gallery, combined, than visited Barcelona and more people visited the Southbank Centre, Tate Modern and Tate Britain, combined, than visited Hong Kong."
The Library of Birmingham remained the most visited free attraction outside London.
It came in 11th place with 1.8 million visitors.
Chester Zoo, was the most visited paid for attraction in England outside London with 1.7 million visitors.
It had an 18% increase in visitors due to the opening of its Islands development, which recreates six tropical South East Asian Islands - the biggest new zoo development in Europe.
The National Museum of Scotland was the most visited museum outside of London with 1.6 million visitors.
The Scottish National Gallery of Modern Art Two had a 35% increase in visitors after hosting The Amazing World of MC Escher, while the Scottish National Gallery of Modern Art One had a 47% increase in visitors thanks to Artist Rooms: Roy Lichtenstein.