A tandem bike, a tin bath and military ammunition were among the items dumped in canals and rivers last winter.
They were just some of the more bizarre objects recovered in a four-month survey of rubbish in waterways, carried out by the Canal and River Trust.
The charity said clearing discarded rubbish from canals and rivers in England and Wales costs it £1m a year. 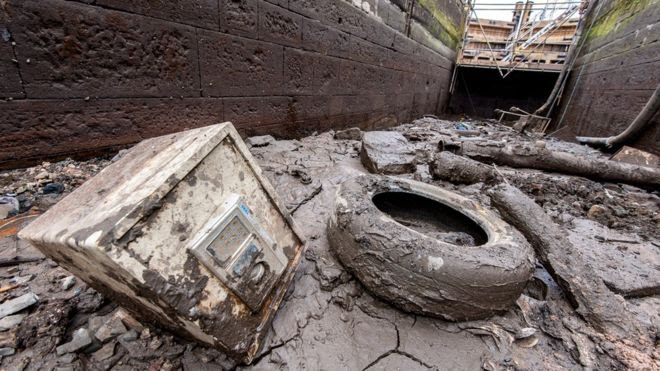 A safe and a tyre emerge from a drained canal lock

This could be spent on improving habitats for wildlife and ensuring waterways are kept clear, it said.

Last winter's survey found a typical canal lock the size of a tennis court contained a bicycle, a shopping trolley, a traffic cone, four tyres, 67 glass bottles, 150 plastic bags, 23 cans and three windlasses, or lock keys.
They join more unusual items found in waterways over the past five years, including a 16ft dead python, a bag of bullets, a camper van, a safe and a pizza delivery bike complete with a pizza.
Other items include a headless Paddington Bear, a bus stop sign, a bubble machine, a hearing aid, a darts medal and a World War Two hand grenade.
The charity, which looks after more than 2,000 miles of waterways, said tyres and other rubbish contain pollutants which can poison fish and wildlife, or leave creatures trapped.
Peter Birch, national environment manager for the Canal and River Trust, said: "I'm constantly surprised at what people throw into the canal and the quantity of litter that we retrieve.
"Dealing with the problem is a big task and the money could be better spent enhancing the canals for people and wildlife to enjoy for years to come."
The trust is urging people to think twice about polluting their local canal or river with old plastic bags and litter, and consider volunteering to clear rubbish.
When the trust was launched in 2012 it was granted a £460m property endowment and a £800m guarantee of government funding to be distributed annually over 15 years.
Other funding comes from boating and moorings, utilities, grants and charitable donations.
It carried out the four-month winter survey as part of a £45m restoration and repairs programme.
Posted by All About London at 11:20:00 am