For Little Alan comes to London’s Lyric Theatre, with Al Murray,Stewart Lee, Tim Vine, Gayle Tuesday, Harry Hill and Stouffer The Cat. There will also be a last outing for the legendary Pub Band(with stand in organist).
When Al Murray and Harry Hill heard that their great friend Matt Bradstock-Smith had died they were determined to mark it with a special tribute night made up of Matt's favourite comics and comedy friends. Matt appeared in many of Harry and Al's shows in the early days and fans may well remember him playing Harry's son Little Alan Hill--who only communicated by tapping--in his C4 show. The show is in aid of St Wilfrid's Hospice in Chichester where Matt was looked after in his last days. In common with much of the country's hospice services, St Wilfred's depends on voluntary donations to perform its brilliant and essential work.
View Details - Buy Tickets 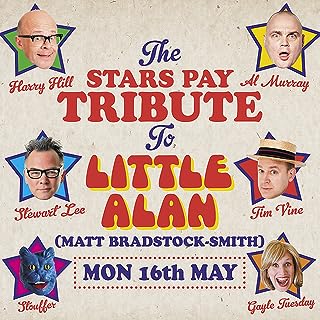