Hundreds of unique objects from the First World War will go on display at a major new exhibition in Croydon.
A century after the Battle of Verdun, the Whitgift Exhibition Centre will host original uniforms and weaponry, rare first issues of the trench newspaper The Wipers Times and recruitment posters. 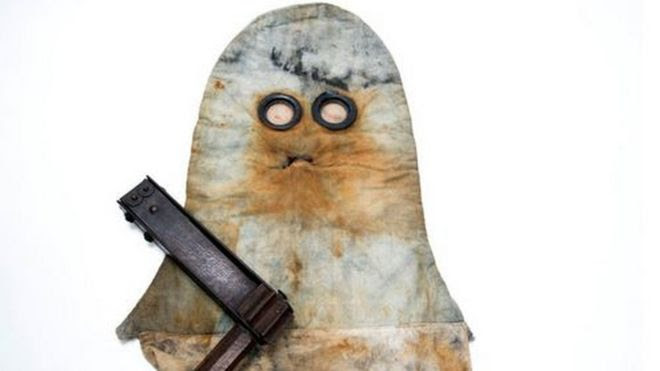 The 'PH' Helmet was an early gas mask. The fabric was soaked in chemicals to protect the wearer from poison gas. The rattle was to sound the alert

Visitors can see mock-ups of trenches and an Edwardian drawing room.
Many items have never been on public display before.
Remembering 1916 - Life on the Western Front tells the story of the war through objects, displays and testimony from individuals on both sides.
A locket holds a portrait of an unknown airman from the Royal Flying Corps, with a fragment of fabric from the Red Baron's red triplane.
Re-enacted rooms from the period show call-up papers arriving in the hallway of an Edwardian home.
Numerous weapons are on display, including pistols, a German trench club and machine guns.
Many exhibits come from France, including a railway station sign from Verdun, a military priest's hat and grave markers.
Remembering 1916 opens on 12 March and runs until 31 August 2016.
BBC News
Posted by All About London at 10:22:00 am