Top Gear host Matt LeBlanc gatecrashed a wedding at St Paul's Cathedral while touring round the capital during filming.
He was joined by professional rally driver Ken Block as he spun around the city in a Ford Mustang. 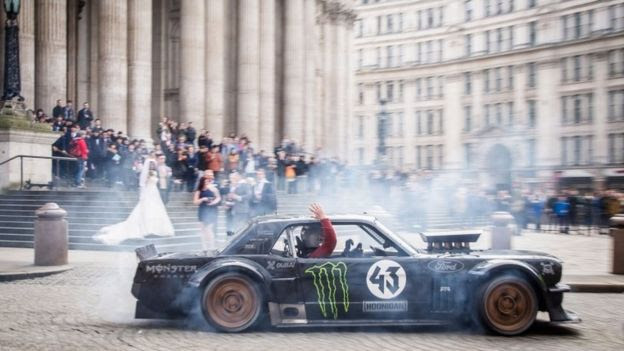 he wedding party got a wave and a quick look in as they drove through the City of London.
The duo in Block's 845bhp 4WD Hoonicorn Mustang took a selfie on Tower Bridge.
Matt LeBlanc also tweeted a picture of himself from Canary Wharf saying: "Canary wharf is nice."
Paul Bradbury, head of retail at West Bromwich Albion Football Club, was in the capital with his wife for the weekend for a football match and caught the action at St Paul's Cathedral.
Mr Bradbury, from Newcastle-under-Lyme, Staffordshire, said: "It was very very loud and entertaining but everyone seemed to enjoy it.
"Matt LeBlanc walked down and had a quick look of the route before he jumped in the car.
"The car seemed to stall for a couple of minutes but they got going again and made a couple of takes with the wedding party on the steps."
The new series of BBC Two show is due to start in May.