Westminster bridge is to become the fourth Thames crossing to have a segregated cycle superhighway, Boris Johnson announced today.
The Mayor confirmed plans to protect cyclists, who make up almost a third of traffic crossing the Grade-11 listed bridge in the morning rush hour, after majority support in a public consultation.
But separate plans to demolish the iconic Vauxhall bus garage have been put on ice after about a third of respondents opposed Transport for London’s planned changes to the area. 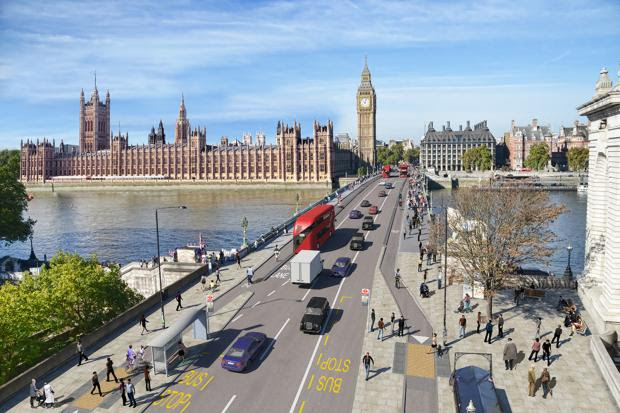 Work will begin later this year to install a 1.8m-wide cycle lane on both sides of Westminster bridge. Segregated lanes are already in place on Southwark and Vauxhall bridges, and one is due to open next month on Blackfriars bridge.
The Westminster lanes will link directly into the Mayor’s flagship east-west “Crossrail for bikes” scheme on the Victoria Embankment, which will be formally opened on April 30.
The layout of the roundabout on the south side of the bridge at Waterloo will be remodelled, with segregated space for cyclists, separate traffic lights giving cyclists an early start and improved pedestrian crossings.
There will also be a new cycle route along the South Bank as part of the “central London grid”.
Mr Johnson said: “Every day we see flocks of cyclists sweeping back and forth across this iconic bridge, so it makes real sense for it to become the next bridge to benefit from a segregated lane.
“It’s going to make a real difference to the safety of cyclists, and with further improvements being made to this out-dated junction, pedestrians are going to benefit too.
"We’ve been working flat-out to improve roads across the capital, and I’m delighted that Londoners have once again stepped forward to back our plans.”
TfL said that 74 per cent supported or partially supported the proposals. Leon Daniels, managing director of surface transport at TfL, said: “This latest radical redesign of one of London’s most disconnecting and intimidating junctions will bring it into the 21st century to support an ever-growing London.”
At Vauxhall, 61 per cent of 1,247 people responding to a TfL consultation were generally positive about removing the gyratory, while 31 per cent were opposed.
A sizable number of community activists objected to the loss of the bus station and said the proposals to convert the gyratory to two-way streets were not good enough.
TfL said it would review all points raised in the consultation and publish a fuller report this autumn.
Construction of the cycle lanes on Westminster bridge is due to start this Autumn and be completed by 2018, subject to works approval.
Posted by All About London at 10:21:00 am