Crossrail 2 has been given the go-ahead by George Osborne's National Infrastructure Commission.

Crossrail 2 has been given the go-ahead by George Osborne's National Infrastructure Commission.
The north-east to south-west railway, which would tunnel beneath central London, could be running by 2033.
It would link Hertfordshire and Surrey, passing through Tottenham Hale, Euston-St Pancras, Tottenham Court Road, Victoria and Clapham Junction.
But plans for a new station at Chelsea could be axed to save money.
A planned branch to New Southgate could also be delayed in order to save £4bn. 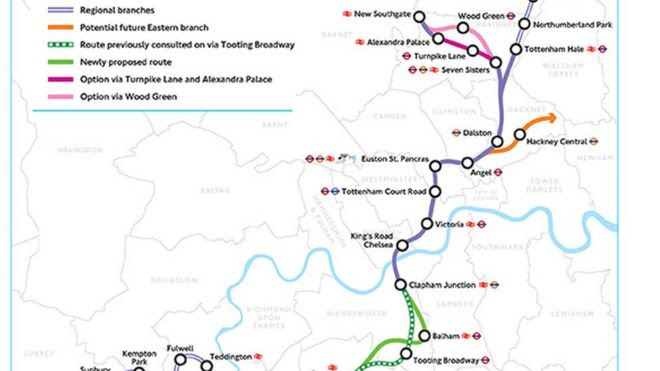 Lord Adonis, the interim chairman of the Commission, said that by the 2030s London would be home to more than 10m people, meeting the definition of a "megacity".
He said: "Even allowing for planned investment and the imminent arrival of the East-West Crossrail line, the capital will grind to a halt unless significant further improvements are made."
He said London should pay more than half the estimated £32.6bn cost of the line and that private financing should help to meet the cost of building stations.
Lord Adonis said at least 200,000 homes should be built along the route. The report identifies the Upper Lee Valley, which currently has poor transport connections, as a potential site for new housing.

The No Crossrail in Chelsea campaign, which has lobbied against a Crossrail 2 station in Chelsea, welcomed the option mentioned in the report of axing the King's Road Chelsea stop to save money.
"It is clear there is no transport or business case for a Chelsea Crossrail 2 station," said Chris Lenon, chair of the campaign.
"Spending more than £1bn on the richest part of London, when so many other places in our great city require investment, is ludicrous.
"Crossrail 2 is a great project. We support it. But plans to build a massive new station in the heart of Chelsea must be scrapped."
Crossrail 1, recently named the Elizabeth Line, runs east-west and is due to be opened in 2018.
Posted by All About London at 9:36:00 am