Benedict Cumberbatch received an enthusiastic reception from a celebrity-packed audience on the official opening night of Hamlet in London.
His Sherlock co-star Mark Gatiss described Cumberbatch as "magnificent".
"I always knew he had it in him," he told the BBC. "We're all very proud and impressed."
Cumberbatch's mother, actress Wanda Ventham, described him as "a bloody good Hamlet".
Other famous names in the audience at the Barbican on Tuesday night included Sherlock's Martin Freeman and Louise Brealey, Downton actor Dan Stevens and Kinks star Ray Davies. 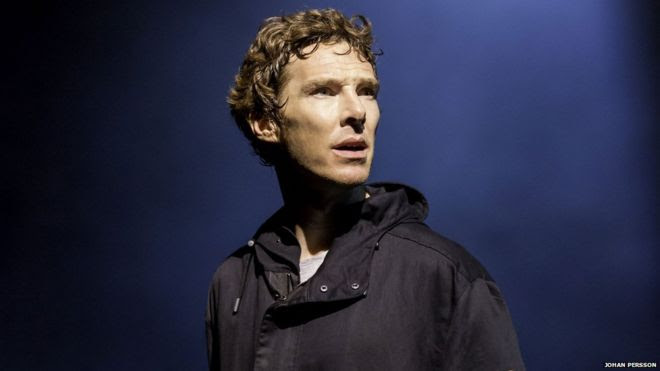 Benedict Cumberbatch (Hamlet) in Hamlet at the Barbican Theatre

The modern dress production, directed by Lyndsey Turner, has been described as the fastest-selling play in British history.
It sees Cumberbatch's Prince of Denmark make a number of costume changes. His clothes include a scarlet military jacket, a David Bowie T-shirt and a hoodie.
The Sherlock star appears in the opening scene listening to Nat King Cole's Nature Boy on an old gramophone.
Also in the cast are Ciaran Hinds as Claudius, Anastasia Hille as Gertrude, Leo Bill as Horatio and Sian Brooke as Ophelia.
The play has already made headlines after preview performances featured the famous "to be or not to be" soliloquy shifted to the start of the play. It now appears in the second act; its usual place is in the third.
Cumberbatch had also made a plea during early performances to fans to not film his performances after he was distracted by red camera lights from the auditorium.
Critics have given the play a mixed reception. Awarding four stars, The Telegraph's Dominic Cavendish said Cumberbatch's Hamlet justified the hysteria.
"He is, in truth, a blazing, five-star Hamlet trapped in a middling, three-star show. The evening's energies are dissipated not intensified by the confining Elsinore dreamed up by designer Es Devlin, and director Lyndsey Turner's tendency to hack the text."
Whatsonstage.com also gave four stars, with Michael Coveney saying Cumberbatch delivered the great soliloquies "superbly, urgently, intelligently and full of concentration, right to the top of the Barbican".
The Independent's Paul Taylor called it a "rather mixed affair" in his three-star review. He said it was "stunningly designed by Es Devlin, with a fair bit of text and story-line shifted around by Turner, to sometimes eloquent, sometimes irritating effect".
But in his two-star review for The Guardian, Michael Billington said: "Cumberbatch, in short, suggests Hamlet's essential decency. But he might have given us infinitely more, if he were not imprisoned by a dismal production that elevates visual effects above narrative coherence and exploration of character."
Although the play is largely sold out, some theatre-goers queued all night in the hope of getting day tickets.
Canadian Michelle Dueck, who lives in London, had arrived at midnight to secure a £10 seat.
"Hamlet is one of my favourite Shakespeares," she said. "I got to see a phenomenal actor portray such a complicated role so brilliantly."
Yurlia Yurova, a Ukrainian in London on holiday, had queued since 10.30pm the previous night, and commented: "It has made my vacation more memorable. It was worth it."
Cumberbatch was last seen on stage in 2011, in the National Theatre's production of Frankenstein, directed by Danny Boyle. He won an Olivier Award for his performance.
He earned an Oscar nomination this year for his performance as Alan Turing in The Imitation Game.
Hamlet is at the Barbican until 31 October.
BBC News
London Theatre - Book Tickets
Posted by All About London at 12:18:00 pm