The British Library has become one of the youngest buildings to be given Grade I listed status for "outstanding architectural and historic interest".
It is the largest public building built in the UK in the 20th Century and was designed by architect Sir Colin St John Wilson and his partner MJ Long.
The library is home to documents including Magna Carta manuscripts and handwritten Beatles lyrics. 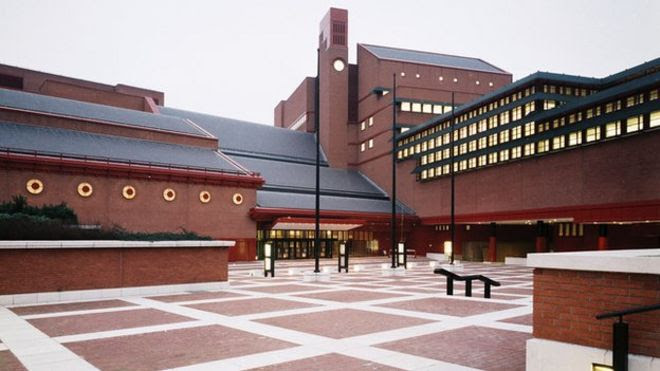 Seven other 20th Century libraries in England have been listed at Grade II.
Construction of the British Library on London's Euston Road began in 1982 and its doors opened in 1997, although moving in all of the books - estimated to be around 14 million - took four years.
It has been described as "one of England's finest modern public buildings" by heritage body Historic England.
The design includes five public floors with 11 reading rooms surrounding the centrepiece of the King's Library tower, which contains George III's library.
"The British Library divided opinion from the moment its design was revealed," said heritage minister Tracey Crouch, "but I am glad that expert advice now allows me to list it, ensuring that its iconic design is protected for future generations to enjoy."
The £506m building is home to the "treasures gallery" which holds rare historic books and documents including the Lindisfarne Gospels, Shakespeare's First Folio, Gutenberg's 1455 Bible and Handel's Messiah written in the composer's hand.
Nearby St Pancras Hotel and King's Cross Station also have Grade I listed status protecting the appearance of the buildings, while the British Library joins Lloyd's of London in the City of London as the youngest buildings listed in England.
British Library chief executive Roly Keating said the status reflected the building's "courageous and visionary design".
"Even in the relatively short period since its opening, it has worked its way into the affections of millions of visitors and researchers, who have discovered its beautiful spaces, subtle use of natural light and exquisite detailing," said Keating.
He added that it was "a privilege" to be listed alongside the seven other 20th Century libraries across the UK.
"As well as celebrating architectural excellence, this listing is a reminder, in the midst of the digital age, of the vital importance of libraries as physical spaces of the highest quality at the heart of their communities," said Keating.
The seven libraries to be awarded Grade II status are: