Victims of the Great Plague 'discovered' at Liverpool Street station

A mass burial site that may contain 30 victims of the Great Plague has been discovered in the City of London.
The skeletons were found during excavation of the Bedlam burial ground at Liverpool Street, which will serve the cross-London Crossrail line. 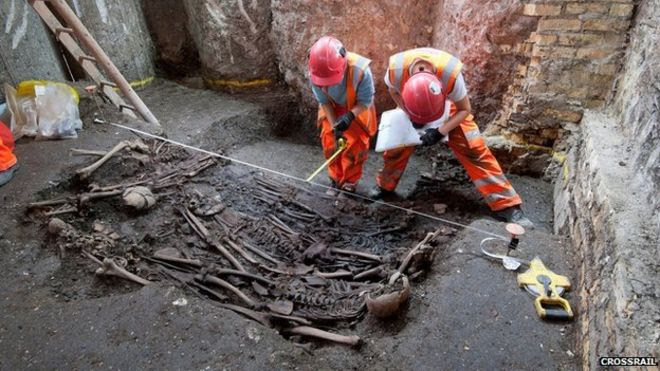 Archaeologists said the wooden coffins had rotted away leaving a "distorted mass grave"
.....

A headstone found nearby was marked 1665. Scientists hope to establish whether bubonic plague or some other pestilence was the cause of death.
The skeletons will be analysed by the Museum of London Archaeology.
Archaeologists said the fact the individuals appear to have been buried on the same day suggest they were victims of the Plague.
Crossrail lead archaeologist Jay Carver said: "This mass burial, so different from the other individual burials found in the Bedlam cemetery, is very likely a reaction to a catastrophic event.
"We hope this gruesome but exciting find will tell us more about one of London's most notorious killers."
The burial ground was in use from 1569 to at least 1738 with recent research suggesting up to 30,000 Londoners were buried there during that time.
Archaeologists have so far excavated 3,500 skeletons from the site and are expected to complete their work in September.
So far Crossrail has found more than 10,000 artefacts spanning 55 million years over 40 construction sites in London.
Posted by All About London at 9:40:00 pm