London commuters are dealing with long queues and delays as they try navigating the capital during a strike that has shut down the Tube network.
About 250 extra buses have been laid on but there are fears of potential gridlock if commuters switch to cars.
The 24-hour strike by four unions began on Wednesday evening and there will be no Tube service until Friday.
Unions are unhappy at conditions offered to drivers on a new Night Tube service due to start next month. 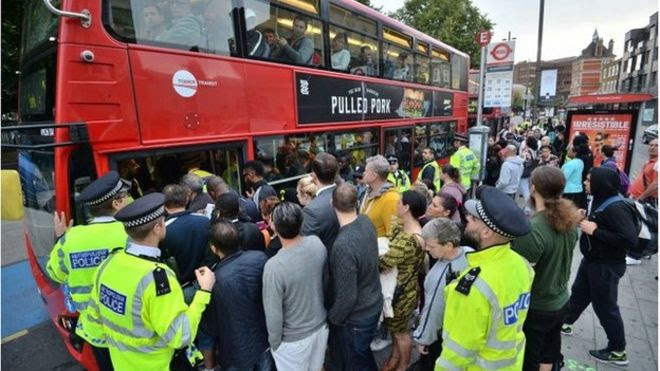 TfL said about 250 extra buses would be laid on during the strike to help deal with extra demand
...

Even those aiming to beat the crowds and setting out on their journeys by 06:00 BST faced travel problems.
Alessandra Bonomolo tweeted: "6:20am. Couldn't get on the first train - too crowded" while Roxy Baker said: "Not even 6:30 and you can barely get on the 205 at Bow Church... its first stop".
Others have been more creative with how they executed their journeys.
Steve Davison tweeted: "#tubestrike genius - just saw some guys flag down a London open top tour bus to get to work. Crazy line at bus stop versus an open top ride."

The strike, which follows a 24-hour stoppage on 8-9 July, saw Tube staff leave work between 18:30 and 21:30 BST on Wednesday.
Members of Aslef, the Rail, Maritime and Transport union (RMT), Unite and the Transport Salaried Staffs Association (TSSA) are all involved in the dispute.
Many union members will be standing on picket lines throughout the duration of the strike, which is over concerns new rotas to accommodate the night service will mean greater weekend working.
London Underground (LU) has apologised for the disruption, saying the latest offer - a 2% salary increase this year, an extra £200 per night shift for drivers for a limited time, and a £500 bonus for Night Tube staff - was aimed at improving work-life balance.
Mayor Boris Johnson called the latest offer "incredibly generous", and said he would not authorise any more money or negotiate while unions were "holding a gun to Londoners heads".
He said: "The way forward is to get this excellent deal to their membership. They should call off this stupid strike and put the deal to their members.
"No driver is being asked to work more hours than they do today. "
But Mick Whelan, the General Secretary of Aslef said: "The Tube driver works intensively in very awkward conditions. It affects their health, work-life balance and they don't have the best of lives."
He said the competency and skill levels required by Tube drivers exceeded that of bus drivers and as such staff needed to be compensated.
"We are not against the Night Tube in its run in a reasonable and adequate manner... but I don't believe it can be delivered [by 12 September]," he said.
A striking Tube driver, who later admitted he was an RMT representative, phoned BBC London 94.9 to say he had seen the new rosters and they showed LU would be "spreading staff much more thinly" to maintain the Night Tube.
He said: "As well as being made to work more nights and weekends they're also being displaced and told to work 30 minutes up the line and that their duties can be changed at 24 hours' notice. But of course there's been no mention of that."
Live coverage of the Tube strike
Latest travel updates on London Underground
London Tube strike: Facts to know
12 tips for a first-time cycling commuter
How to cope with the Tube strike
Tube strike: No beer and sandwiches
Steve Griffiths, LU's chief operating officer, told the BBC: "The Night Tube... cannot be at any cost. They're clearly not understanding our commitment to work life-balance.
"We've recruited 500 additional staff specifically to run the Night Tube and that's across stations and train operators.
"No-one's being asked to work extra hours... we've also committed that our train operators will have the same number of weekends off today as when they do Night Tube."
One official from the RMT also told BBC London that members would "escalate action" in the run-up to the scheduled start of the night service.
Mr Johnson added he was "not fussed" about the night service starting on 12 September as planned, as long as it started in the autumn.
Posted by All About London at 10:08:00 am