London Underground services have resumed after a 24-hour strike shut down the entire network.
The industrial action by four unions began on Wednesday evening as part of a dispute over the Night Tube, which is due to start next month.
The unions are unhappy at conditions offered to drivers who will be working on the new service. 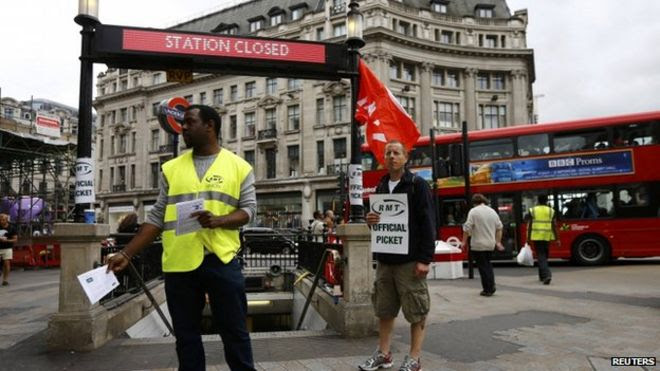 Talks between the unions and London Underground are due to resume next week
...

Talks between the unions and London Underground (LU) are due to resume next week.
The latest strike was the second time Tube stations across the capital have closed in the current dispute, following a 24-hour walkout on 8-9 July.
The Rail, Maritime and Transport (RMT) union, the Transport Salaried Staffs' Association (TSSA), Unite and the train drivers' union Aslef took part in the action.
The unions turned down a new offer from LU which included a 2% salary increase this year, an extra £200 per night shift for drivers for a limited time and a £500 bonus for Night Tube staff when the service is introduced in September.
The RMT union said rotas drawn up for the new Night Tube were "rosters from hell" that would disrupt the work-life balance of staff.
London Mayor Boris Johnson accused the unions of "holding a gun" to Londoners' heads.
Questions have been raised over whether the dispute will be resolved in time for the night service to begin on its planned date.
Mr Johnson has said he is "not fussed" about the night service starting on 12 September as planned, as long as it started in the autumn.
Posted by All About London at 10:59:00 am