Fossils found in some of London's most famous landmarks are being brought to life with the help of a north Wales technology company.
Llandudno-based Livetech are behind a website detailing the location of almost a thousand creatures - up to 160 million years old - frozen in time within the walls of buildings including the Houses of Parliament, Buckingham Palace and Westminster Abbey.
The map has revealed that the Clipsham limestone used to repair the Gothic parliament building since the 1920s includes the fossils of echinoids or sea urchins dating back to the Middle Jurassic period. 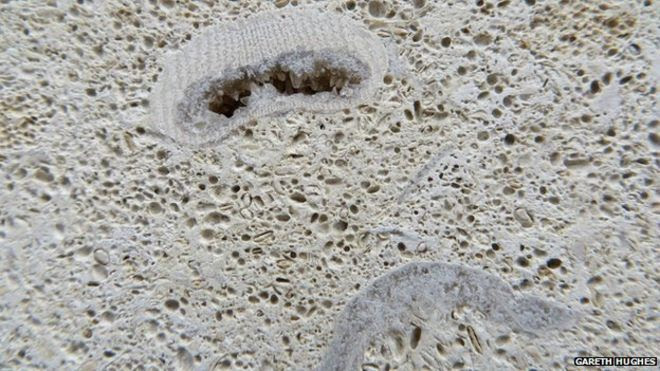 'London Pavement Geology' is the brainchild of retired Colwyn Bay geologist Dave Wallis and Dr Ruth Siddall, of University College London.
Mr Wallis said: "Ruth had a database which she used regularly on her accompanied walks and in discussions with colleagues.
"She's researched the architecture of buildings, particularly the facings on the front, and also where the raw materials - the stone - came from.
"Ruth even went back to the quarries where the materials were worked and was then able to identify the geological contexts."
Although they are now very much part of London's landscape, Mr Wallis explained that thanks to Britain's colonial past many of the fossils they have discovered originate from thousands of miles away.
Mr Wallis said: "London has probably the best collection of different rocks used on the outside of buildings in the world.
"It is because the captains of industry during the industrial revolution spared no expense and they sent their architects to wherever they could find the best or most exotic materials.
"There are rocks on the outside of buildings from China, South Africa, India, Brazil, North America and everywhere in Europe, just to make them look attractive."
Mr Wallis says new locations - accurate to within 15 metres - are being added to the website every day and the team welcome new additions from amateur fossil hunters.
Livetech are also working on a mobile app to guide smartphone users to places of interest and provide information on both the creatures within, and how they ended up in London.
Mr Wallis added: "London is a geologist's dream.
"Without having to go and climb a cliff or go down a mine, you can walk along with a cappuccino and a smartphone and, without trying too hard, you can see a huge range of rock types, fossils and minerals."
Posted by All About London at 12:05:00 pm