Britain's biggest satellite operator has a critical launch on Friday.
Inmarsat, which provides mobile telecommunications, is attempting to put up the third spacecraft in its next-generation global network.
The launch, on a Russian Proton rocket, from Baikonur, Kazakhstan, is set for 17:44 local time (12:44 BST).
The new network, known as Global Xpress, will enable Inmarsat to offer its customers substantially faster connections at a lower cost. 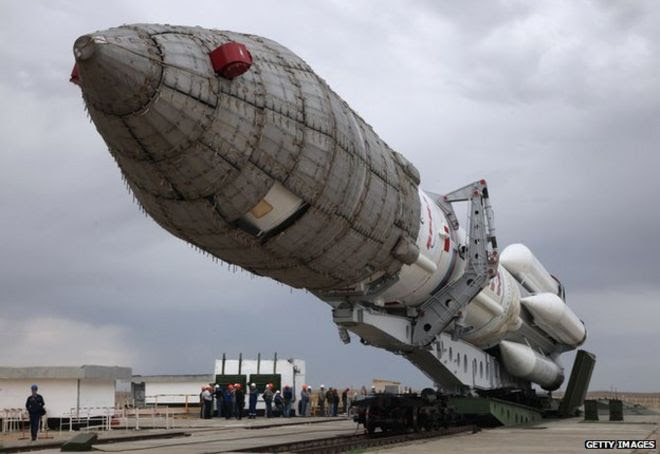 This is the return to flight for Proton, after a botched launch in May

Having the third spacecraft in orbit means those customers can have coverage right around the world.
Rupert Pearce, Inmarsat's CEO, told BBC News: "We launched our first satellite over Europe, the Middle East and Africa about a year ago; our Americas satellite comes into operation in about a week; and this third satellite, which will go operational by the end of the year, completes a global seamless network."
There is sure to be some anxiety, however, at Inmarsat's London HQ as the lift-off approaches.
Friday's mission is the first time Proton has flown since its failure to orbit a Mexican satellite in May. The rocket has been plagued with reliability issues in recent years.
But Russian space officials have assured Inmarsat that the cause of the latest loss has been identified and corrected.
The Proton mission is a long one. It will take five burns of the rocket's Breeze-M upper-stage to get into position to release the Global Xpress satellite.
From lift-off to separation, the flight time is just over 15 and a half hours.
The satellite will need to make some further refinement manoeuvres of its own to drop into its designated orbital slot over the Pacific. And then there will need to be a period of commissioning before the new £1bn ($1.6bn) Global Xpress network can go fully live.
"Yes, we're about a year late, and that's very frustrating because we know our customers want this technology," said Mr Pearce. "But I think it's going to be very successful for us, and we've got at least a couple of years' lead on anything else that even looks like this coming to market."
Inmarsat's principal customer base is the shipping sector, but the company also caters for any groups that need telecoms away from a fixed line.
These include oil and gas platforms, aeroplanes, military deployments, aid agencies in disaster areas, and even TV news crews reporting from trouble zones.
Inmarsat is in a constant battle to protect its market dominance in mobile satellite services.
Until now, these services - which can be video, phone or simple data connections - have been delivered in the L-band part of the electromagnetic spectrum.
GX marks the company's first foray into the Ka-band, and the higher frequency will facilitate the higher bandwidths increasingly demanded by customers.
"This is a massive deal for Inmarsat," commented Wei Li, who follows market trends for space consultancy Euroconsult.
"Inmarsat as you know has traditionally built its business around L-band. It's a great frequency; it's very reliable. But its bandwidth is limited, and in the last five years we've seen a lot of maritime, aeronautical, and even land mobile users switch from Inmarsat's L-band to competitors offering Ku or Ka-band.
"So, for Inmarsat, the Ka of Global Xpress is really important to help it maintain its market leader role."
The £1bn investment in Global Xpress includes a fourth satellite, which is built and going through a testing programme at the manufacturer, Boeing, in the US.
This additional platform will be put up as soon as it is available should anything go wrong with Friday's launch. And even if not needed for this reason, it will still probably be launched next year anyway to pursue other market opportunities.
BBC News - More on This Story
Posted by All About London at 11:59:00 am