Oscar-winning actress Cate Blanchett is to receive the BFI Fellowship for her contribution to film.
The BFI praised the 46-year-old's "mesmerising screen presence" which "has captivated audiences since her earliest roles".
The actress won Academy Awards for her roles in Woody Allen's Blue Jasmine in 2014 and in 2005 for The Aviator.
She will be awarded the honour at the London Film Festival's annual awards ceremony on 17 October.
The BFI described Blanchett as "a fearless and subtle actress". 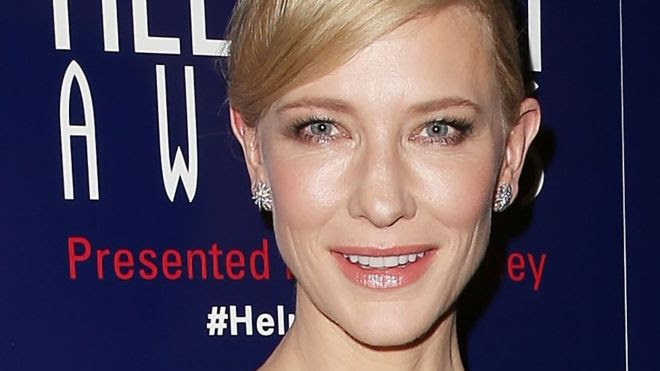 "She has the rare gift of seeming utterly to inhabit the characters she plays and has an amazing ability to convey complex layers of emotion to stunning effect," it added.
Blanchett shot to global fame playing Queen Elizabeth I in 1998 film Elizabeth, followed by roles in The Talented Mr Ripley, The Lord of the Rings trilogy and The Curious Case of Benjamin Button.
The actress has two films receiving their UK premiere at the London Film Festival - Carol and Truth.
Truth, which also stars Robert Redford and Mad Men's Elisabeth Moss, tells the true story of CBS journalist and 60 Minutes producer Mary Mapes, who risked her career to find the "truth" and expose a story on the then US President George W Bush.
It will be screened as the Fellowship special presentation film.
Set in 1950s Manhattan, Carol sees Blanchett play a woman trapped in a loveless marriage who falls for a younger woman, played by Rooney Mara.
Previous recipients of the Fellowship include Tim Burton, Helena Bonham Carter, Ralph Fiennes and Stephen Frears.
Al Pacino and Mel Brooks have also been awarded the honour in the past year.
Suffragette, starring Meryl Streep and Carey Mulligan, will open the London Film Festival on 7 October, while Danny Boyle's Steve Jobs biopic will bring it to a close on 18 October.