'Temperamental' Big Ben was ringing up to six seconds late

The bongs of Big Ben have been ringing at the wrong time over the past fortnight, parliament's clocksmiths have admitted.
The 156-year-old Great Clock went out by up to six seconds because it is "temperamental", according to clocksmith Ian Westworth.
Mechanics discovered it became delayed over the weekend of 15 and 16 August but have now gradually fixed it.
A parliament spokesperson said it is now accurate to less than one second.
It is not known what caused the clock's time to change so much. 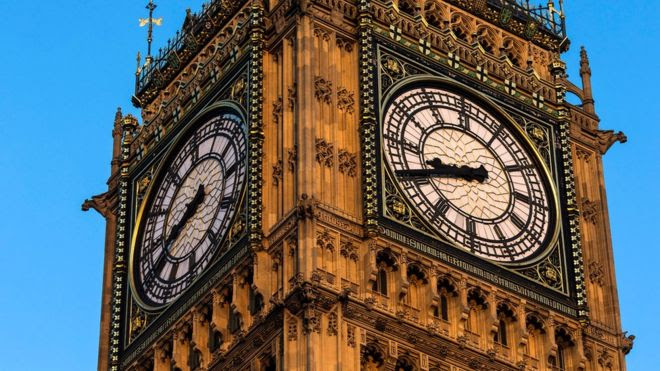 'It does have a little fit'

The Great Clock is considered to be within its "normal parameters" if it strikes within two seconds of the correct time.
Mr Westworth said the fault had been detected on 17 August and adjustments were made to the system, although this caused the clock to run too fast at times.
The incorrect chimes had caused interruptions to BBC Radio 4, which broadcasts the sound of Big Ben live.
The clock is altered by adding and removing old coins from its pendulum to change the rate at which it swings.
The clocksmith said the age of the clock means that "it does have a little fit every now and then".
"Imagine running your car for 24 hours a day, 365 days a year for the last 156 years," he added.
Routine checks on the clock's performance are being made every day, rather than three times a week, to keep it accurate.
Mechanics are investigating whether the fault was caused by changes to the pendulum.
A parliament spokesperson said air pressure and temperature, the escapement mechanism and problems with the gears could all affect the clock's mechanism.
BBC News
Posted by All About London at 12:12:00 pm