The final novel by author Sir Terry Pratchett has been released, almost six months after his death.
The Shepherd's Crown, the 41st novel in his Discworld series, went on sale in the UK and Commonwealth at midnight BST (23:00 GMT Wednesday).
In the UK, fans gathered for midnight openings at stores in London, Oxford and Newcastle. More shops will open earlier than usual on Thursday.
The Shepherd's Crown will be published in the US on 1 September. 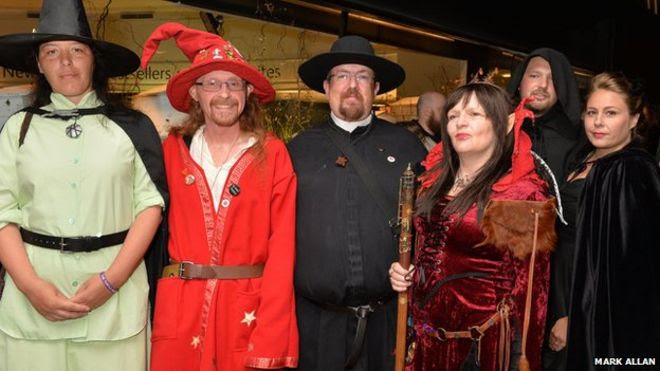 The release will be an emotional moment for many fans. One book shop in Perth, Australia, is giving away a free packet of tissues to every customer "because this really is goodbye".
Sir Terry died at the age of 66 in March, eight years after being diagnosed with Alzheimer's disease.
He built up a huge following for the Discworld series, which started as an affectionate parody of fantasy novels and became a vast satire on modern life.
Shops opening at midnight included Waterstones in Piccadilly, central London, where the author's friend Rob Wilkins read an extract to 200 ticket-holders.
Mr Wilkins earlier told BBC News: "It was a hard book to complete because Terry's health was declining in the last year. But he was still enjoying the writing."
The book was about 90% finished by the time illness meant the author was forced to stop work, Mr Wilkins said.
"He wasn't able to polish it quite as he would have liked and there were a few ideas that he would have loved to have followed up on and he never got the opportunity."

I'm going to savour it like a fine wine

Mr Wilkins also told BBC Breakfast Sir Terry left "an awful lot" of unfinished writing.
He said: "Terry was always well into the next novel while the current one was being edited. But I'm sorry to say they will remain unpublished.
"There's 10 titles I know of and fragments from many other bits and pieces.
Mr Wilkins added: "Terry wanted me to have a device connected to his heartbeat so when his heart stopped it would wipe the contents of his hard drive."
The Shepherd's Crown is the fifth Discworld novel to feature young witch Tiffany Aching.
One of those at Waterstones Piccadilly overnight was Pat Harkin, who told BBC Radio 4 he had immediately started the book.
"There were fans last night who said they were going to start reading it and they weren't going to stop until they'd finished it," he said. "I've not taken that approach.
"I'm going to savour it like a fine wine. I did hear one or two fans say they were never going to read the last page, so that it never ends."
As well as the midnight openings, some shops elsewhere in the UK had breakfast openings and others will host special readings during the day.
BBC News
Posted by All About London at 12:02:00 pm