All-night Tube service may be delayed

The launch date for the London Underground (LU) Night Tube may be delayed, the BBC understands.
The 24-hour weekend service on the Jubilee, Victoria and most of the Piccadilly, Central and Northern lines was due to start on 12 September.
Members of four unions took strike action on 6 August and 8 July in the dispute over the Night Tube proposals. 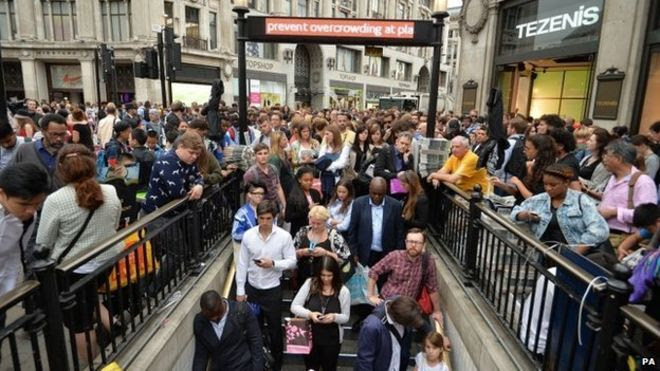 LU denied it was delaying the start date, insisting it was "operationally ready".
However, LU added the service would not be launched "at any cost".
Three unions have announced two 24-hour walkouts for 25 and 27 August.
The Rail, Maritime and Transport union (RMT), the Transport Salaried Staffs Association (TSSA) and Unite members announced on Tuesday their members would walk out for 24 hours from 18:30 BST on those days.
Talks were held at the conciliation service Acas in a bid to avert further strike action.
A further meeting between the train drivers' union Aslef and LU is expected later this week.
Unions are unhappy at conditions offered to drivers working on the Night Tube service.
By Richard Westcott, BBC transport correspondent
The Tube strike's getting a bit confusing so to try to clear things up a little...
Despite rumours, drivers' union Aslef has not done a deal with London Underground. My understanding is they are not a million miles away and it could happen in talks due on Friday, or next week. - but it's not definite and they still have the option to join the strike.
We're hearing the 12 September start date for 24-hour Tubes may be put back a bit, to create some breathing space to sort this out. But officially London Underground says it's still aiming for the 12 September, although "not at any cost".
Does any of this make a difference?
Well, even if Aslef did not join in, the fact the RMT is striking guarantees major disruption. They control maybe 35% of drivers, plus station staff, signallers and engineers. Plus there's the fact that many drivers would not cross a picket line.
As for the start date, London Mayor Boris Johnson seems easy about it slipping if it helps the talks - but not for too long.
In a nutshell then, the strikes are still on and will still cause "travel chaos" as us journalists like to say.
During the last strike on 6 August, London Mayor Boris Johnson said he was "not fussed" about the night service starting on 12 September as planned, as long as it started in the autumn.
Len Duvall, leader of the London Assembly Labour group, said: "By speculatively announcing a start date without any consultation with the people expected to run the service, Boris Johnson's gung-ho approach has led to disputes, disruption and now delay."
He said he hoped a delay would provide "breathing space" for the unions and management to resolve the dispute.
In a statement, LU also claimed the cost of what the unions were asking for would cost about £1.4bn to 2023/24, forcing an increase in fares by 6.5% or the scaling back of modernisation plans.
Chief operating officer Steve Griffiths, said: "Having previously argued that it was all about work-life balance, certain unions have now made a whole series of unaffordable demands for more pay, shorter working hours and the reversal of the modernisation of the Tube."
Announcing the strikes on Tuesday, RMT general secretary Mick Cash said its members had "made it clear that they are determined to protect their work-life balance and not fall into a trap where they will be forced to wreck their home lives in order to comply with the 'rosters from hell' which have been drawn up to plug the staffing gaps in the Night Tube plans".
In September 2014, Transport for London (TfL) announced the Night Tube would run on Fridays and Saturdays with six trains per hour through central London on five Tube lines.
On the Northern Line, there would have been eight trains an hour to meet demand at busy stations between Leicester Square and Camden Town, TfL said.
The Night Tube was part of a long-term economic plan. Chancellor George Osborne and Mr Johnson said it would add £6.4bn to the London economy by 2030 and create 500,000 new jobs.
It was also announced in February the night-time services would be extended to the Metropolitan, Circle, District, and Hammersmith & City lines by 2021 and extended to the London Overground in 2017 and the Docklands Light Railway by 2021.
Posted by All About London at 9:38:00 pm