A classical sculpture has been saved for the nation by London's V&A museum and the National Galleries of Scotland.
The Campbell Sisters Dancing a Waltz by Lorenzo Bartolini depicts the lives of fashionable and wealthy Britons in Florence in the early 19th Century.
The statue was sold to a foreign bidder at auction but was prevented from leaving the country in case the sale price could be matched in the UK.
A group of arts charities helped raise the required £500,000. 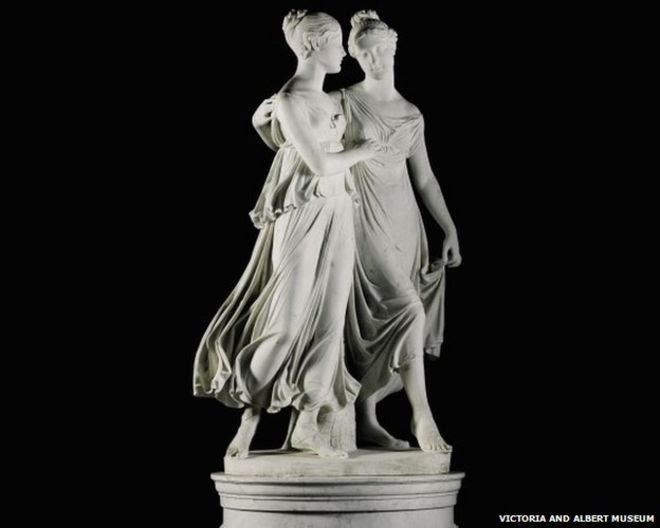 The statue in white carrara marble shows Emma and Julia Campbell dancing in flowing dresses and sandals.
Their uncle, the 6th Duke of Argyll, is thought to have commissioned the piece from Bartolini in 1821 for about £500.
It had been on loan from the duke's descendants to the National Galleries of Scotland until the family decided to sell it at Sotheby's last year.

It was deemed to be of outstanding importance as one of the leading commissions showing the British presence in Florence in the early 19th Century by arguably the greatest living Italian sculptor at one point.
The money was jointly raised by the National Heritage Memorial Fund, the Art Fund Charity, National Galleries of Scotland and the V&A, where it can now be seen.
V&A director of collections Beth McKillop said: "We are excited that we have the opportunity to display The Campbell Sisters Dancing a Waltz at the V&A.
"Bartolini's sculpture is a delightful work and an outstanding addition to the national collection of sculpture housed at the museum."
Thousands of objects request an export licence every year and about 20 to 30 are deferred in case money can be raised but only about a third these stay.
Posted by All About London at 10:52:00 am