Plans for a new London cycle highway have been unveiled with a separate lane at Buckingham Palace.
A trial two-way segregated track could be introduced at Spur Road, in front of the Queen Victoria Memorial at the palace, with bollards that can be removed on big occasions.
Public consultation on the plan begins later and ends on 4 October. 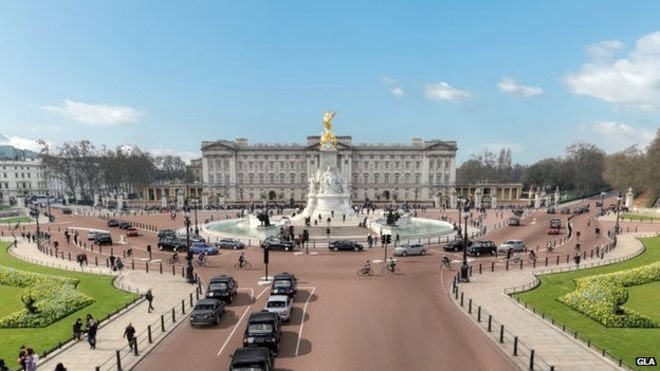 The trial of the cycle highway could take place for a year to assess how effective it is
.....

If the trial is given the go-ahead and is successful, the track could be introduced in summer 2016.
The trial would take place over a year to assess how effective it is and the Greater London Authority said the plans would finish the route across central London from Tower Hill, through Parliament Square to Hyde Park Corner and Lancaster Gate.
Mayor of London Boris Johnson, said: "The new east-west superhighway will be a treasured part of our new network, running through the heart of the capital and past the front door of some of our most loved landmarks such as the Houses of Parliament and Buckingham Palace."
The highway plan has been developed by Mr Johnson, Transport for London and Royal Parks.
Posted by All About London at 9:00:00 am