Different worlds From royalty to Peter Pan, London’s premier park has plenty to offer
The 350 acres of Hyde Park, opened to the public in 1637 by Charles I, is home to many monuments and statues erected throughout the years. ....
Starting at Cumberland Gate docking station, pick up your Santander Cycle and, as always within parks, follow the cycle path through the heart of the Royal Park. Dock your bike just before the bridge and enjoy the views over the Serpentine towards the Palace of Westminster. A short walk around the lake is George Frampton’s statue of Peter Pan, commissioned by the author JM Barrie in 1902, who took inspiration for his work from the surrounding area.

Dock at the southern end of the Serpentine Bridge for the Princess Diana memorial fountain. Made from 545 pieces of Cornish granite, children can splash about in it. Back on a bike, take a loop on the cycle path to Kensington Palace then Albert Memorial, built by Queen Victoria after her husband died of typhoid in 1861.

Ride east to statue dedicated to the victories of the Duke of Wellington. Commissioned by King George III its centrepiece is an 18ft tall bronze statue of Achilles, made from melted-down enemy cannons. Complete the loop with a short ride to Speakers’ Corner, the traditional site for public speeches since the mid 1800s, where the likes of Karl Marx and George Orwell have preached to the gathered crowds.
This route is supplied by the British Cycling’s Go Sky Ride programme. For other routes visit tfl.gov.uk/leisureroutes 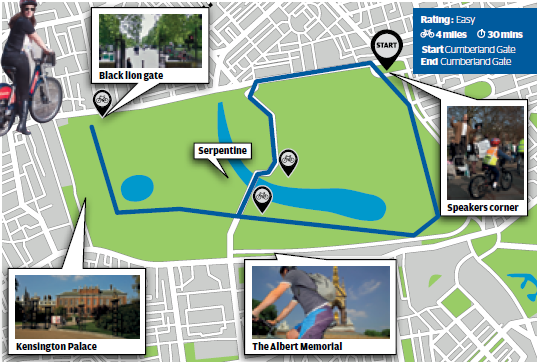 Did you know?
Since July 2010 there have been over 40 million Santander Cycle journeys. TfL welcomed Santander as the new official partner and together they launched a revolutionary new app to help customers hire a bike more easily.
Santander Cycles is easy
Just go to any docking station with your bank card and touch the screen to begin. Or download the official Santander Cycles app to get quicker access.
Hire a bike, ride it where you like and return it to any docking station along the way. Costs start from £2 for 24-hour bike access, including unlimited 30 minute journeys
Posted by All About London at 9:15:00 am