Veterans of World War Two have taken part in events to mark the 70th anniversary of VJ Day, when Japan surrendered and the war ended.
A memorial event was held at Horse Guards Parade, attended by the Prince of Wales and Duchess of Cornwall.
And the Queen and Duke of Edinburgh joined the PM and former prisoners of war at a remembrance service at St Martin-in-the-Fields church in London.
David Cameron said it was important to "honour the memory of those that died".
In Tokyo, Japan's Prime Minister Shinzo Abe and Emperor Akihito observed a minute's silence at a service. 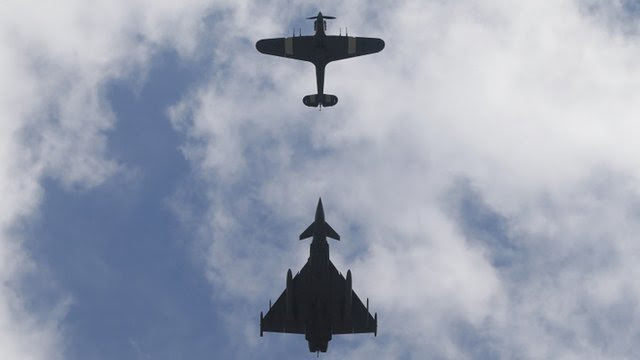 VJ Day ended one of the worst episodes in British military history, during which tens of thousands of servicemen were forced to endure the brutalities of prisoner of war camps, where disease was rife and there was a lack of food and water.
It is estimated that there were 71,000 British and Commonwealth casualties of the war against Japan, including more than 12,000 prisoners of war who died in Japanese captivity. More than 2.5 million Japanese military personnel and civilians are believed to have died over the course of the conflict.
Veterans and their families watched a fly-past of historic and current military aircraft on Horse Guards Parade as part of Saturday's events.
Actor Charles Dance read the poem The Road to Mandalay, by Rudyard Kipling.
The poem was set to music and became a favourite marching tune for many in the 14th Army in Burma, now known as Myanmar.
Veterans, war widows and members of their families then marched from Horse Guards Parade to Westminster Abbey, accompanied by marching bands.
Members of the public lining Whitehall applauded as the parade went past, with many of the veterans waving union jacks.
Wreaths have also been laid at the Cenotaph on Whitehall.

You could tell them by their medals and cap badges, and by the military bearing that some still have.
Elderly former servicemen mingled with tourists in Trafalgar Square and the Mall between ceremonies to remember, mourn and celebrate the sacrifice of friends and comrades in the war against Japan.
The day started solemnly at St Martin-in-the-Fields, as the last post was sounded, a piper played a lament, and a survivor of Japanese prison camps reflected on comrades who died in them.
Even the church's 12 bells - ringing as the old soldiers emerged into the sunshine - had a plangent tone.
At Horse Guards Parade, there were more poignant reminders of what many who fought regarded as the "forgotten" war - overlooked by a home country celebrating Victory in Europe.
But as a Hurricane fighter and modern Typhoon jet flew incongruously close and low overhead, and Charles Dance recited the poem "The Road to Mandalay", the mood was lighter.
Finally, a parade of veterans and military bands down Whitehall signalled celebration - of extra decades of life and tyranny defeated.
At the service at St Martin-in-the-Fields the Reverend Dr Sam Wells told the congregation: "The struggles, the suffering and the sacrifice of the war in the Far East are a defining experience in our nation's history.
"We stand in awe of those who were tried in ways beyond what most of us ever have to go through and greater than many of us can ever imagine.
"People who lost life, limb and liberty that we might know peace."
And former prisoner of war Maurice Naylor spoke at the service, saying it was an honour to be joined by the Queen - "a veteran herself" - and members of her family.
He said: "How do I feel now? I feel lucky to have survived so long and still be able to address you. I feel sad for the families of those who died as a result of their captivity."
Although fighting in Europe ended in May 1945, the battle between the Allies and Japan continued.
It was only after two atomic bombs were dropped on the country that the Japanese surrendered on 15 August that year.
In Japan, Mr Abe expressed "profound grief" at his country's actions in WW2, but he faced criticism from South Korea and China who said Japan had failed to properly atone for its actions.
Events have also taken place across the UK to mark the 70th anniversary:
A service will be held at the Far East Prisoner of War Memorial Building at the National Memorial Arboretum on Sunday.

WWII: History's most savage and devastating war
Countdown to Hiroshima: timeline of the bomb that changed the world
Was it right to bomb Hiroshima?
I fought the Japanese in Burma aged 18
BBC News and Videos